The North conducted yet another nuclear test Friday morning at its Punggyu-ri nuclear test site near the country's northeastern coast.

South Korea's military officials said the test was the most powerful yet, with an explosive yield estimated at 10 kilotons.

North Korea later announced through its state-run media that it carried out a successful nuclear test, claiming to have attained the ability to produce a small, light and diversified nuclear warhead that can be mounted on missiles. 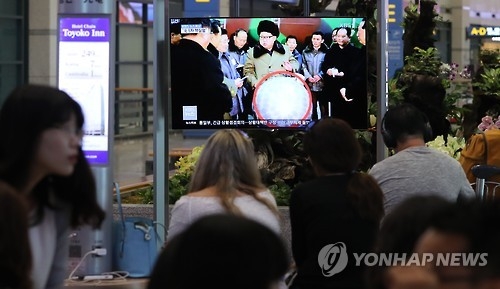 The test on Friday morning took place just after members of the key six-party denuclearization talks -- South Korea, the U.S, China, Russia and Japan – came together at the G20 Summit in China and East Asia Summit in Laos to denounce North Korea's nuclear weapons program.

The high-profile gatherings have also been the venues for South Korean President Park Geun-hye to commit unwavering efforts to strengthen the trilateral partnership with the U.S. and Japan in dealing with a defiant North Korea. Especially at a time when collaboration with China and Russia has been strained.

The U.S.-led plan to deploy an anti-missile defense system in South Korea was one of the focal points in talks between U.S. President Barack Obama and Chinese President Xi Jinping, as well as between Park and Xi. China believes the powerful radar and missile interceptor system of the Terminal High Altitude Area Defense (THAAD), will tip the regional security balance in favor of the U.S. This it said will directly impact its security interests.

Obama and Xi collided on THAAD and the South China Sea issue in their talks.

Despite trouble with China, the surprise test by Pyongyang showed that at least Seoul, Washington and Tokyo were determined to deal with North Korea's latest provocation.

Closely following the late morning nuclear test, the three countries together asked for an emergency session of the United Nations Security Council (UNSC) to swiftly address the provocation.

In response, the UNSC scheduled a meeting for Friday evening (New York time) to discuss a possible punitive resolution than is even more stringent than Resolution 2270 adopted in March to punish North Korea for its previous nuclear test.

The top foreign ministers of the three countries also spoke over the phone to vow "additional" and "powerful" countermeasures.

"South Korea, the U.S. and Japan agree to swiftly find additional measures to fill loopholes in Resolution 2270 through close collaboration, which will be really painful for North Korea," a foreign ministry official quoting Yun and U.S. Secretary of State John Kerry said. The two men talked on the phone within hours of the nuclear test

The countries will also work together to have a more searing resolution adopted at the UNSC and introduce additional state-level sanctions, the official said. "Both ministers shared the view that they are completely on the same page over the fifth nuclear test."

In a separate call, Yun and his Japanese counterpart Fumio Kishida said both shared each country’s initial analysis of the nuclear test and promised intimate cooperation in seeking more sanctions against North Korea.

Experts said the latest nuclear test may hasten the deployment of THAAD on the peninsula, which could pose challenges for getting China to cooperate with stronger sanctions.

Such a security environment could favor North Korea -- there is a chance that Pyongyang will continue its military provocations and nuclear development in order to maximize its bargaining power, according some experts.

"Squeezed by sanctions, an anxious Kim Jong-un appears to be willing to hold negotiations with the U.S. after securing nuclear deterrence capabilities," Park Won-gon, an international relations professor at Hangdong Global University, said.

"North Korea's development of nuclear weapons and nuclear delivery means has entered the final stage, and with its (suspected) possession of miniaturized warheads, North Korea seems to want to show off its ability to attack the mainland U.S.," Park said.

Meanwhile, the latest security developments may put China's North Korea policy to the test at the UNSC, experts predicted.

"Having recently had a summit meeting with South Korea, China may find it difficult to act hostile toward South Korea. But the country may find it hard to take severe action against North Korea," Kim Heung-kyu, an expert on China at Ajou University, said.

"China is likely engaged in a serious review of its Korean Peninsula policy," he said, adding that the UNSC may face difficulties seeking an additional resolution in the absence of the veto-yielding China's reservations.