SEOUL, Sept. 9 (Yonhap) -- The South Korean government will not rule out the possibility that North Korea may carry out another nuclear test soon, Unification Minister Hong Yong-pyo said Friday.

"North Korea has been preparing a nuclear test and given the related developments, I think that it can do another nuclear test soon," Hong said during a meeting at the Foreign Affairs & Unification Committee of the National Assembly today.

At the meeting, ruling party lawmaker Choi Kyung-hwan underlined the need to acknowledge the grave reality that "North Korea's nuclear weapons program can't be destroyed with the current sanctions and pressure" and it is time to try a new tactic.

In response, Hong, who is also Korea's representative for the now-defunct six-party talk aimed at North Korea’s denuclearization, said the government is "fully aware" that it failed to stop the North from advancing its nuclear weapons technology despite "various efforts." Also, the government will consider diverse options to deal with the current situation.

"Since things have become more serious, the government will try to take actions that put more pressure on the North to change its behavior when a new round of sanctions by the United Nations Security Council comes out," he said.

"Kim Jong-un's goal is to be given nuclear power status and achieve his goal based on that. Until then, he seems intent to keep developing nuclear weapons," the policymaker said. He, however, made clear that the international community is never going to recognize the North as a nuclear power. 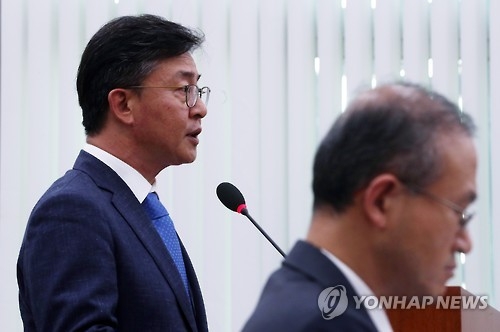 Another nuke test can't be ruled out: unification minister

Another nuke test can't be ruled out: unification minister