"The United States condemns North Korea's Sept. 9 nuclear test in the strongest possible terms as a grave threat to regional security and to international peace and stability. North Korea stands out as the only country to have tested nuclear weapons this century," Obama said in a statement.

It was unusual for the U.S. to issue such a statement in the name of president, rather than secretary of state, White House press secretary or National Security Council and other officials. That shows the seriousness with which Obama views the situation.

"To be clear, the United States does not, and never will, accept North Korea as a nuclear state," Obama said.

Obama said he spoke by phone with South Korean President Park Geun-hye and Japanese Prime Minister Shinzo Abe, and agreed to work with the international community to "to take additional significant steps, including new sanctions, to demonstrate to North Korea that there are consequences to its unlawful and dangerous actions."

"I restated to President Park and Prime Minister Abe the unshakable U.S. commitment to take necessary steps to defend our allies in the region, including through our deployment of a Terminal High Altitude Area Defense (THAAD) battery to the ROK, and the commitment to provide extended deterrence, guaranteed by the full spectrum of U.S. defense capabilities," he said. 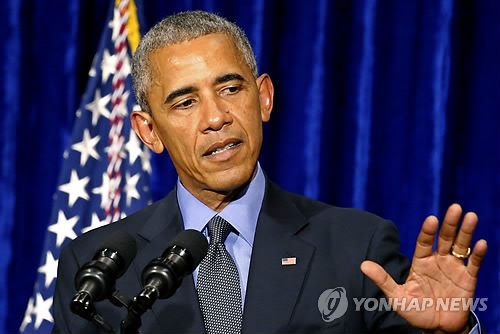 The North detonated a nuclear device at its Punggye-ri underground nuclear test site on the country's founding anniversary earlier Friday, just eight months after its fourth test in January. The communist nation said the test was successful.

Moreover, the latest test is believed to be the most powerful of all five, with its yield estimated at 10 kilotons of TNT, compared with January's 6 kilotons, according to South Korea's military. The powerful yield demonstrates the regime's nuclear program is making real headway.

"Today's test, North Korea's second this year, follows an unprecedented campaign of ballistic missile launches, which North Korea claims are intended to serve as delivery vehicles for nuclear weapons targeting the United States and our allies, the Republic of Korea and Japan," he said.

Obama also said the North's provocative and destabilizing actions have instead served to isolate and impoverish its people, rather than achieving its stated national security and economic development goals.

"Today's nuclear test, a flagrant violation of multiple UN Security Council Resolutions, makes clear North Korea's disregard for international norms and standards for behavior and demonstrates it has no interest in being a responsible member of the international community," he said.

As commander in chief, Obama said he has a responsibility to "safeguard the American people and ensure that the United States is leading the international community in responding to this threat and North Korea's other provocations with commensurate resolve and condemnation."