"I condemn in the strongest possible terms the underground nulear test by the Demoratic People's Republic of Korea. This is yet another brazen beach of the resolutions of the Security Council. For the fifth time in recent years, the DPRK alone has broken the international norm against nuclear test," Ban told reporters.

"This unacceptable act endangers peace and security in the region and is another vivid reminder of the urgent need to strengthen the global nuclear test ban regime," he said.

Ban urged the North to "reverse its course and commit to a path of denuclearization."

"Rather than pursuing nuclear weapons and ballistic missiles technology, the DPRK should be promoting the wellbeing of the country's people," he said. "I count on the Security Council to remain united and take appropriate action. We must urgently break this accelerating spiral of escalation." 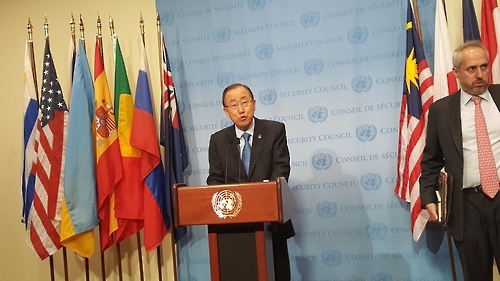 It is unusual for Ban to call a press conference to condemn North Korean provocations, rather than issuing a statement. The move was seen as aimed at underlining his message to the Security Council that was set to hold an urgent meeting on the North's nuclear test later in the day.

The North detonated a nuclear device at its Punggye-ri underground nuclear test site on the country's founding anniversary earlier Friday, just eight months after its fourth test in January. The communist nation said the test was successful.

Moreover, the latest test is believed to be the most powerful of all five, with its yield estimated at 10 kilotons of TNT, compared with January's 6 kilotons, according to South Korea's military. The powerful yield demonstrates the regime's nuclear program is making real headway.