SEOUL, Sept. 10 (Yonhap) -- More and stronger sanctions should be in place against North Korea as its nuclear capability has been upgraded in the past decade, South Korea's top diplomat said Saturday, calling on the international community to make concerted efforts to put further pressure on the communist state.

His remarks came as Pyongyang conducted its nuclear test in its northeastern region early Friday claiming that its detonation test was "successful."

"Over the past decade, North Korea's nuclear capability has highly advanced, and (the latest nuke test) clearly shows that its leader Kim Jong-un does not intend to change," South Korean Foreign Minister Yun Byung-se said during a meeting with his staff. 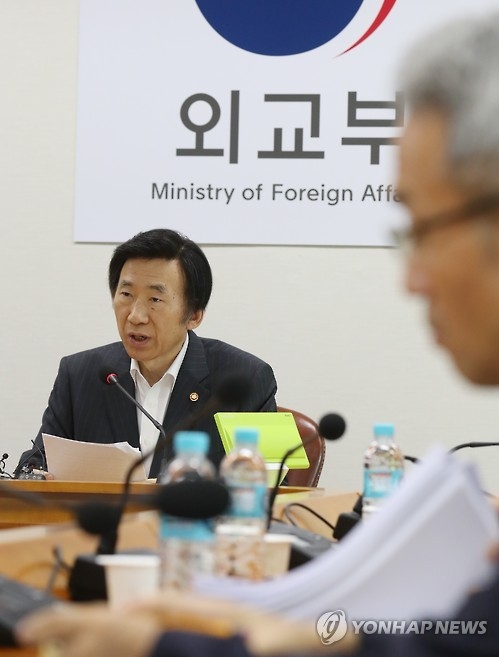 "We need more and stronger sanctions and pressure (against North Korea) to create an environment where they are left with little option but to change themselves," he said, vowing to impose a comprehensive set of sanctions led by the U.N. Security Council.

Hours after its nuclear test, the North claimed that the successful test has advanced its ability to mount a nuclear warhead on a ballistic missile.

"The standardization of the nuclear warhead will enable (the North) to produce at will and as many warheads as it wants, including a variety of smaller, lighter and diversified nuclear warheads of higher strike power with its firm hold on the technology to produce and use various fissile materials," the North said in a statement carried out by its official media outlet, the Korean Central News Agency.

South Korea's Joint Chiefs of Staff (JCS) analyzed the nuclear test as the North's biggest test to date with the device giving an explosive yield reaching 10 kilotons. The yield was higher than the estimated six kilotons detected in January's nuclear test. 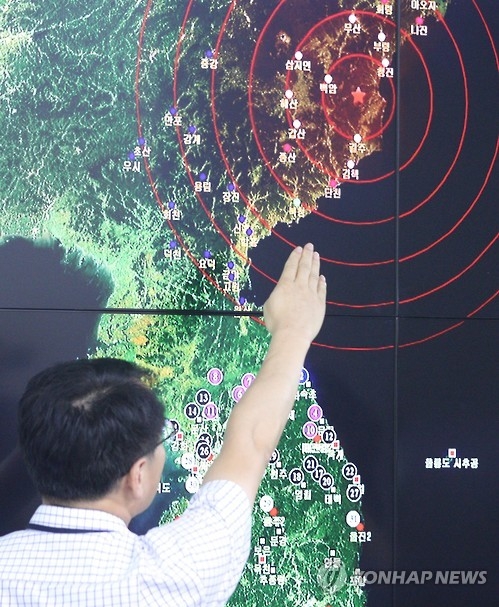 Seoul's foreign ministry said South Korea will seek support in the coming weeks for a new set of sanctions by the United Nations in response to North Korea's latest nuclear test by stressing that concerted and stronger sanctions by the international community are necessary to deter Pyongyang's nuclear threat.

Yun is scheduled to attend the week-long U.N. General Assembly meeting that starts on Sept. 17 where he will urge cooperation in formulating a new set of U.N. Security Council-led sanctions against the communist state.

During his stay in New York, the country's top diplomat will hold a meeting with his counterparts from the U.S. and Japan to discuss how to impose stronger sanctions on Pyongyang, the ministry said. Yun is also to deliver a speech at the U.N. General Assembly meeting on Sept. 23.

Meanwhile, Yun has asked for cooperation from France in orchestrating new U.N.-led sanctions against North Korea's fifth and largest-ever nuclear test in defiance of continued calls from the international community to stop its nuclear program.

He talked with his French counterpart Jean-Marc Ayrault on the phone on Friday and demanded the U.N. Security Council to join a cooperative move to enact additional bold, strong sanctions in response to the latest provocation by Pyongyang, according to the ministry.

Yun expressed hopes that France, a permanent member of the U.S. Security Council, would actively engage in enacting strong resolutions against the North's nuclear threats. The South Korean minister also demanded France and the European Union make concerted efforts to impose sanctions against North Korea in close cooperation with Seoul.

In addition, Yun hoped that strong South Korea-France ties will lead to a solution to handling human rights infringement issues in North Korea. 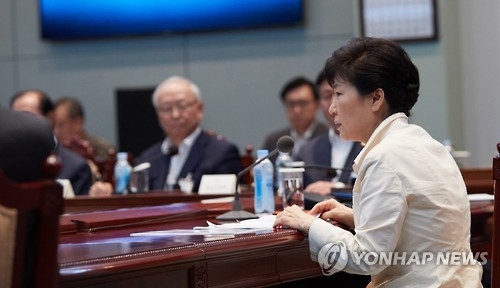 The U.N. Security Council has expressed strong condemnation of North Korea's latest nuclear test. The Council proclaimed to immediately set out preparations for putting together a new resolution of sanctions against the communist nation.

During a phone conversation with Han late Friday, U.S. Secretary of Defense Ashton Carter stressed the "ironclad" alliance among the U.S. and its allies including South Korea, pointing at various means such as the nuclear umbrella, traditional deterrents and missile defense measures that can deter North Korean nuclear ambitions, according to the defense ministry here.

Earlier in the day, South Korea, the U.S. and Japan also held a three-party video conference to discuss ways to beef up cooperative measures and the mutual exchange of information regarding North Korea.

Despite rising anxious calls to deter North Korean nuclear ambitions among international community members, the communist's ceremonial head of state Kim Yong-nam has vowed that the reclusive country will increase its presence in international society to meet its "status as a nuclear power," according to the North's state-run Korean Central News Agency (KCNA).

Kim, the president of the Presidium of the Supreme People's Assembly (SPA), said "(North Korea) will secure the world peace and safety and continue to expand and develop international relations in a way that fits its status as a nuclear powerhouse," the Korean Central News Agency (KCNA) reported earlier in the day. The remarks were made in a celebratory address at a banquet marking the 68th anniversary of the regime's foundation.

A pro-North Korean newspaper based in Japan also said Saturday that the North will push ahead with its plan to strengthen its nuclear capability.

"Measures, which have great destructive power, will be taken in stage to drive the United States and its follwers into a corner," the Chosun Sinbo said in an article.