SEOUL, Sept. 10 (Yonhap) -- Cash-strapped Hanjin Shipping Co. was given provisional court protection in the U.S. on Friday to unload cargo at some ports without worrying about its ships being seized by its creditors, industry sources said Saturday.

Hanjin Shipping currently under receivership in South Korea has sought after court protection in the U.S. as its four ships have been stranded off the coast of the U.S. out of fears that they will be seized by creditors.

According to the sources, U.S. Bankruptcy Judge John K. Sherwood on Friday granted Hanjin Shipping protection under Chapter 15 of the Bankruptcy Code.

More than half of Hanjin's 140 ships have been stranded at sea as they were blocked from entering ports in the United States, China, Canada and many other nations, as lashing service firms and port workers refused to work for the shipper out of concerns that they would not be paid.

Meanwhile, Hanjin Shipping's funding plan has faced a hurdle as Korean Air Lines Co., its biggest shareholder, has failed to get approval from its board of directors to provide some 60 billion won to the ailing shipper.

But the board of directors of Korean Air Lines failed to reach a conclusion after two days of debate and put off its decision about the proposed funding scheme to Saturday, citing the problem of breach of trust, although Cho is likely to pony up the 40 billion won next week. 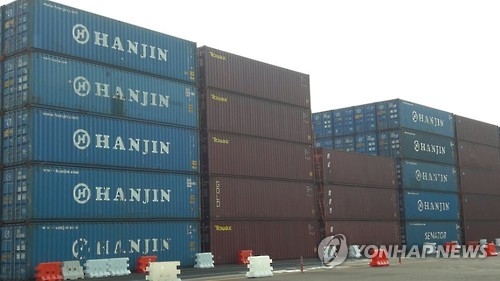