In a congratulatory message, Park cheered Lee Jung-min, South Korean judoka and silver medalist, saying, "Your unrelenting effort and triumph over your visual impairment have shown us the touching moment of having one's dearest dream come true."

Park also sent a congratulatory message to Lee Ju-hee, a silver winner in the men's 10 meter air pistol contest, which reads, "You have quenched the hearts of many... You have made a new history for South Korean Paralympics by winning medals in three Paralympics straight."

The South Korean president also extended words of appreciation to Jin Song-lee, a bronze winner in the women's 63 kilogram judo title, saying, "To many, your outstanding performance has inspired courage and passion to chase one's dream till the end." 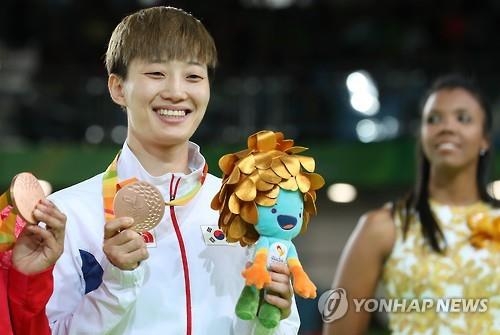 Officially launched in 1960 in Rome, the Paralympic Games has established itself as the world's major multi-sport event involving athletes with a range of disabilities.

The 2016 Rio Paralympics, which runs Sept. 7 to 18, features a total of 23 sports, including athletics, swimming and other water sports, football and equestrian, as well as wheelchair basketball, curling, fencing, rugby and tennis.