SEOUL, Sept. 11 (Yonhap) -- Kang Jung-ho of the Pittsburgh Pirates homered in a loss as part of a three-hit game.

Kang belted his 18th home run off Robert Stephenson of the Cincinnati Reds at PNC Park in Pittsburgh on Saturday (local time), though the Pirates still lost 8-7.

Kang's homer came with a man on and two outs in the bottom of the third and staked the Pirates to a 4-0 lead. It was the South Korean's fourth home run in his last five games.

He also knocked in a run with a single in the first. 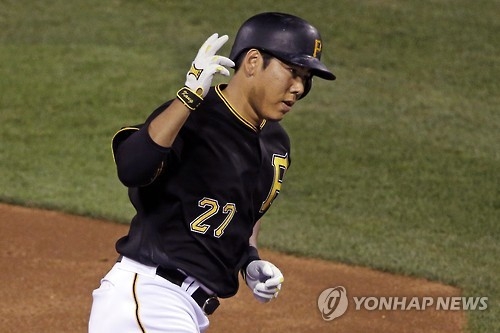 The Reds erased the 4-0 deficit with four runs in the fourth and three more in the fifth. The Pirates got two runs back in the sixth, but the Reds added an insurance run in the ninth thanks to Joey Votto's solo blast.

Kang hit a single in the bottom of the ninth and was lifted for a pinch runner. Francisco Cervelli later drove in a run to make it 8-7, but the Bucs couldn't get any closer.

The Pirates dropped to 69-71, 5.5 games out of the second wild-card spot in the National League.

Kang was the only South Korean to get a plate appearance in the majors Saturday.

Choi Ji-man of the Los Angeles Angels entered the game against the Texas Rangers as a defensive replacement at first base in the top eighth at Angel Stadium of Anaheim. He didn't get to hit the rest of the game, as the Angels lost 8-5.

Kim Hyun-soo of the Baltimore Orioles, batting just .190 (4-for-21) in his last seven games, watched his club defeat the Detroit Tigers 11-3 at Comerica Park in Detroit. Lee Dae-ho of the Seattle Mariners, who platoons at first base with left-handed hitting Adam Lind, sat out for the second straight game as his team pounded the Oakland Athletics 14-3 at Oakland Coliseum.

Oh Seung-hwan, closer of the St. Louis Cardinals, didn't pitch in the team's 5-1 win over the Milwaukee Brewers at Busch Stadium in St. Louis.