SEOUL, Sept. 11 (Yonhap) -- President Park Geun-hye will have talks with the leaders of the ruling and the two main opposition parties this week to discuss ways to tackle North Korea's latest nuclear test and other pressing issues, a presidential spokesman said Sunday.

The meeting will bring together Park and the three party chairpersons -- the ruling Saenuri Party's Lee Jung-hyun, Choo Mi-ae of the main opposition Minjoo Party of Korea and the People's Party's Park Jie-won -- at the presidential house of Cheong Wa Dae at 2:00 p.m. on Monday, Jung Youn-kuk said.

The meeting marks Park's first three-party talks since the incumbent 20th National Assembly kicked off its four-year term in mid-June.

The Monday meeting, which closely followed Park's back-to-back trips to Russia, China and Laos, will focus on mustering non-partisan cooperation in dealing with the aftermath of North Korea's nuclear test. 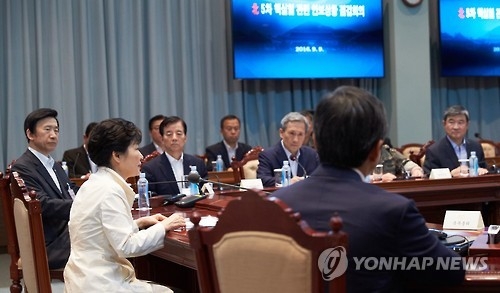 South Korea has pledged to push for a United Nations Security Council resolution stronger than Resolution 2270 which was adopted in response to the January nuclear test.

Park also plans to brief the party chairpersons on the international consensus on zero-tolerance toward North Korea's nuclear programs, the key outcome of her recent overseas diplomacy, and call for bipartisan cooperation in the deployment of the Terminal High Altitude Area Defense (THAAD), a high-tech U.S. anti-missile defense system, in South Korea.

To counter North Korea's evolving nuclear and missile threats, South Korea and the U.S. are in the process of deploying a THAAD battery in South Korea by the end of 2017.

"President Park plans to delve into the results of her back-to-back meetings with the heads of state from four allies and request non-partisan collaboration in regards to North Korea's fifth nuclear test," Cheong said, referring to her summits with the state leaders of Russia, the U.S., China and Japan during the trips.

Economy-related bills and her labor market reform initiative will also be the focus of Park's calls for cross-party collaboration, according to officials.

The THAAD deployment issue, however, is likely to become a flashpoint as the main opposition party largely remains opposed to the military buildup plan.

Party officials said Choo plans to have a meeting with senior party members to decide what and how to discuss in the Monday meeting with Park.

"Regarding the North Korean nuclear issue, we are in the process of devising ways to denounce North Korea at the National Assembly as part of non-partisan collaboration," Minjoo Party spokesman Youn Kwan-suk said. "On livelihood issues and other political agenda, however, we will discuss today to what extent we will go."