SEOUL, Sept. 11 (Yonhap) -- A South Korean hit boy band of the 1990s has made a comeback to the K-pop scene after 16 years, calling its two-day concert a "dream stage" and "a beginning," hinting at active musical activities at home.

Of the six debut members of the 1997 group, only five -- Eun Ji-won, Lee Jae-jin, Kang Sung-hoon, Kim Jae-duc and Jang Su-won -- showed up in the press conference that took place in the Olympic Park Gymnastics Stadium in southeastern Seoul on Sunday.

"This is our dream concert," said Kang, looking back at the band's heyday and his fans. "I could see how much our fans awaited us. (In yesterday's concert) I saw some fans who sat there, simply too amazed to scream out." 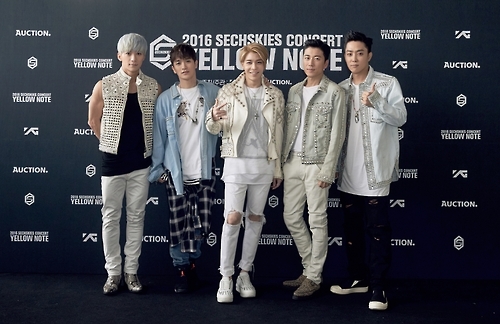 "They used to be girls in school uniforms, but now I feel like I'll have to respect them and treat them as adults," he said, winning heart-felt support from his teammates.

The media event was organized to promote the concert "Yellow Concert" that drew 20,000 concertgoers in its Saturday-Sunday run. The concert marks the first independent concert by the group, which had been one of the two iconic K-pop boy bands of the 1990s along with H.O.T. In May, Sechs Kies -- with all members in their late thirties -- signed a three-year contract with YG Entertainment, the second largest entertainment agency here. 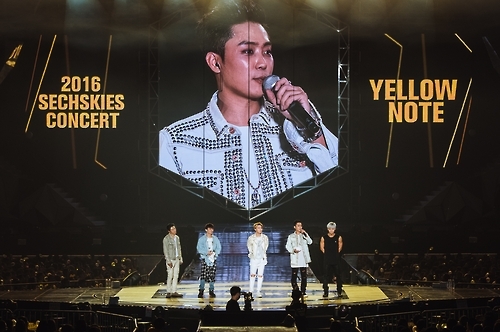 In addition to the concert, Sechs Kies has many arrangements in the works, such as comeback activities with a new EP.

Regarding the re-arranged old hits of the idol group, Kang said, "We could not get the original music record (MR) since it's been quite a while since we left the stage, so we made new recordings with some updates with the sound. You should check out our debut song, School Byeolgok -- it's been re-arranged in more powerful charismatic remix in typical YG style."

The Sechs Kies members regretted that their disbandment in 2000 was too early to see the rise of K-pop hallyu, or global burgeoning of K-pop music.

The singer-dancers agreed that they no longer have the stamina to sing six songs in a row as they had in their heyday.

"When we get knocked out, we tend to make longer comments during the concert -- that's how you can tell that our energy is getting low," Eun said. 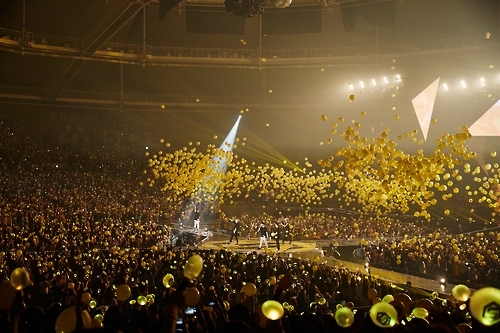