The KBO clubs needed just 605 games to surpass the 7 million mark last Sunday, 85 games ahead of last year's pace, and they're on pace to draw seom 8.3 million fans by the season's end.

The Doosan Bears, the 2015 champions, are running with the pennant this year, and they have also been the most successful team at the gate. They became the first club this season to reach 1 million fans on Sept. 2, and have had 1.04 million fans at Jamsil Stadium in Seoul so far.

The Nexen Heroes and the Samsung Lions moved into bigger stadiums this season, contributing to the uptick in the league attendance. Both clubs have attracted nearly 750,000 fans, some 230,000 more than their totals from 2015.

Overall, each of the 10 clubs has enjoyed an increase in attendance from a year ago. 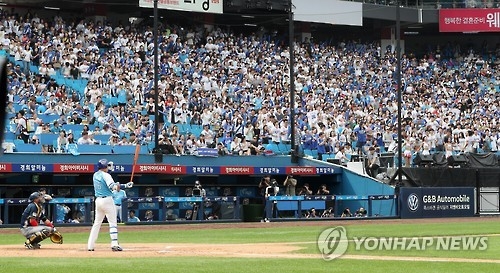