Declining to give further details, he said "Discussion is going on between relevant parties." Asked what his take on Pyongyang's intention behind the repeated provocations is, "It is trying to make the international community feel increasingly insensitive" to its erratic behavior, he said. 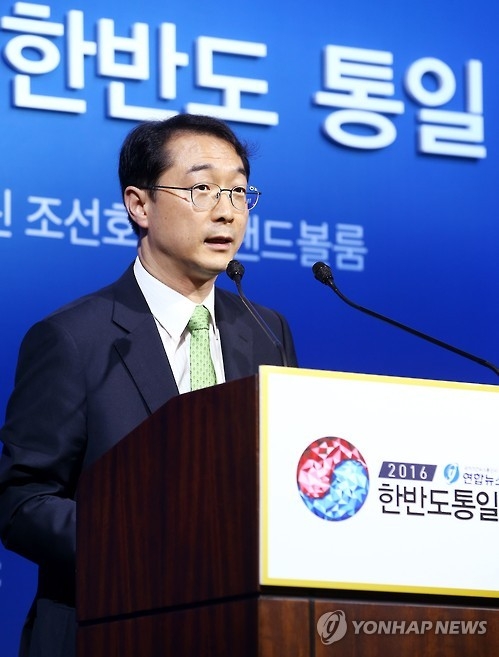 An official from the ministry, who is familiar with the matter, reiterated the government's basic approach to a new package of punitive measures.

In particular, the official cautiously expected the trade between North Korea and China to be affected.

"China can no longer protect a certain aspect (of its trade with North Korea)...We expect it to play a big role (in imposing economic restraint on the North)," he said, hinting a possibility of the trade between the two traditional allies becoming the prime target of a new round of sanctions.

Among possible new measures are believed to include a ban on oil export by China to North Korea, which had been pushed by the U.S. but failed to go into Resolution 2270, and tougher restraint on North Korea's export of coal, iron, steel and labor.

On the cooperation between Seoul and Beijing, he said "Two nations' chief delegates to the six-party talks are closely consulting," adding that the two will continue their direct discussion and talk through the foreign ministers and the U.N. Security Council in order to fundamentally change Pyongyang's strategic position.

That the U.N. Security Council cited Article 41 in its statement issued on Friday following North Korea's fifth nuclear test was very "unprecedented" and "showed its strong willingness to adopt a new round of sanctions in a swift manner," he said.

The statement read, "In line with this commitment and the gravity of this violation, the members of the Security Council will begin to work immediately on appropriate measures under Article 41 in a Security Council resolution.”

Article 41 stipulates member states to apply "complete or partial interruption of economic relations and of rail, sea, air, postal, telegraphic, radio, and other means of communication and the severance of diplomatic relations."

New, stronger resolution on Pyongyang to be pursued in 3 ways: foreign ministry

New, stronger resolution on Pyongyang to be pursued in 3 ways: foreign ministry