WASHINGTON, Sept. 11 (Yonhap) -- U.S. Democratic presidential nominee Hillary Clinton said China has not reined in North Korea in order to use the provocative regime in Pyongyang as a "useful card" in its dealings with South Korea and Japan.

Clinton made the remark in an interview with CNN broadcast Sunday after North Korea surprised the world with a powerful nuclear test, the country's fifth, just eight months after January's fourth test, in a show of Pyongyang's commitment to become a nuclear power.

"Up until relatively recently, I think (China was) under the impression that they could control their neighbor and they didn't want to crack down because they saw it as a useful card to play," Clinton said.

"If (North Korean leader Kim Jong-un) gets a little crazy, maybe the South Koreans will move toward (China) a little bit; he gets a little crazier, maybe they can make some deals with the Japanese about things they want. It was a strategic calculation," she said. 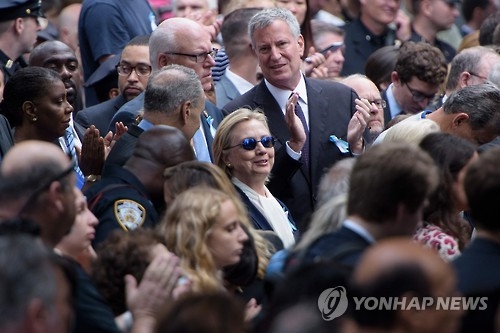 China is North Korea's last-remaining major ally, and a key provider of food and fuel supplies. But it has been reluctant to use its influence over Pyongyang for fears that pushing the regime too hard could result in instability in the North and hurt Chinese national interests.

Analysts say that China often increased pressure on the North in the past too, especially when Pyongyang defied international appeals and carried out nuclear tests and other provocative acts, but China never went as far as to cause real pain to the North.

Friday's nuclear test was the most powerful of the five conducted by the North, with its yield estimated at 10 kilotons of TNT, compared with January's 6 kilotons, according to South Korea's military. The powerful yield demonstrates the regime's nuclear program is making real headway.

The U.S. erupted in outrage, with President Barack Obama issuing a rare statement of his own condemning the test, vowing to seek "significant" new sanctions against the North and pledging never to accept Pyongyang as a nuclear state.

The test has also emerged as an election issue just two months away from the November vote.

Clinton condemned the test as outrageous and unacceptable, calling for stronger sanctions on Pyongyang and greater defense cooperation with South Korea and Japan.

She also said the test shows the U.S. needs "a president committed to reducing, not increasing, the number of nuclear weapons and nuclear states in the world, apparently referring to her rival Donald Trump's suggestion that he may allow South Korea and Japan to develop their own nuclear weapons for self-defense.

Trump blamed the North's test on Clinton, saying the latest test is the fourth since Clinton became secretary of state.

"It's just one more massive failure from a failed secretary of state," Trump said Friday at the Values Voters Summit in Washington.

Clinton: China didn't rein in N. Korea to use Pyongyang as 'useful card'

Clinton: China didn't rein in N. Korea to use Pyongyang as 'useful card'