WASHINGTON, Sept. 11 (Yonhap) -- North Korea is the "single most significant danger" that the next U.S. president will face, a former top U.S. diplomat said Sunday, calling for greater efforts to curb Pyongyang's nuclear and missile programs. 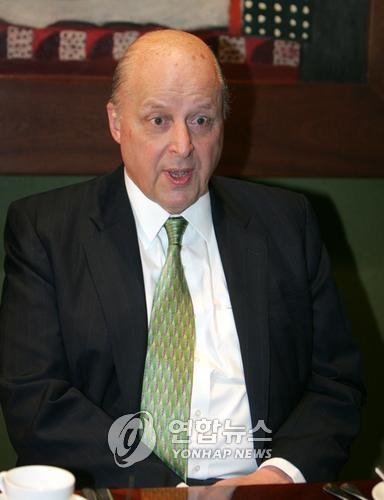 Former Deputy Secretary of State John Negroponte issued the caution in a radio interview after the communist North carried out its fifth nuclear test, just eight months after its fourth test in January. It was the first time the regime has conducted more than one nuclear test in a year.

"I think this is the single most significant danger that the next administration is going to face," Negroponte said. "Something is going to have to be done about the continuing developments of North Korean nuclear and ballistic missile capabilities."

Negroponte, who also served as director of national intelligence and ambassador to the U.N., also said that resolving the issue will take more than a U.N. Security Council resolution or more sanctions, adding that those measures have failed to curb the North's weapons ambitions.

"We're gonna have to find a way to really come to grips with this situation so that someday we don't wake up and learn that the North Koreans have shot a missile that has reached the continental United States," Negroponte said.

Jonathan Pollack, a senior expert on Korea at the Brookings Institution, also said that the issue of the North's nuclear and missile programs will be "a lead item" that the administration of President Barack Obama will bequeath to his successor.

The communist nation is seeking to get the outside world to take its weapons programs as a fait accompli, the expert said, pointing out some unusual points in the North's announcement of its fifth nuclear test conducted Friday.

"North Korea announced the latest test not through governmental or diplomatic channels, but from technical personnel affiliated with an organization identified as the Nuclear Weapons Institute of the Democratic People's Republic of Korea," Pollack said in an article on the institution's website.

The institute made a very specific claim that the test was of "a newly researched and manufactured nuclear warhead" and that the purported warhead was now standardized and could be utilized on an array of ballistic missiles, he said

"Until now, Pyongyang had described tests of its nuclear weapons by a variety of names but never as a warhead," he said. "It clearly wants the outside world to conclude that its weapons capabilities are now an established, irreversible fact."

The North's nuclear and missile testing of recent weeks and months gives them "added urgency that cannot be ignored," he said.

"It will also be a lead item that the Obama administration -- despite its repeated efforts to curtail North Korea's weapons programs through increased cooperation with all affected states -- will bequeath to the next president," Pollack said.

N. Korea is 'single most significant danger' for next U.S. president: Negroponte

N. Korea is 'single most significant danger' for next U.S. president: Negroponte