SEOUL, Sept. 12 (Yonhap) -- President Park Geun-hye on Monday called on political circles to put up a united front in coping with security and economic challenges amid escalating nuclear threats from North Korea.

She made the call during the meeting with the leaders of the ruling Saenuri Party, the main opposition Minjoo Party of Korea and the People's Party -- Lee Jung-hyun, Choo Mi-ae and Park Jie-won, respectively.

"Tensions are rising due to North Korea's fifth nuclear test and there are various risk factors with regard to the security and economy," she said. "I believe it is important to show (to the people) that we are moving forward as one mind."

The meeting came three days after Pyongyang sharply raised cross-border tensions with its fifth and most powerful nuclear test.

During Monday's meeting, Park was also expected to seek bipartisan support for the planned deployment of a U.S. anti-missile system, which she has repeatedly defended as an "inevitable, self-defense" measure. 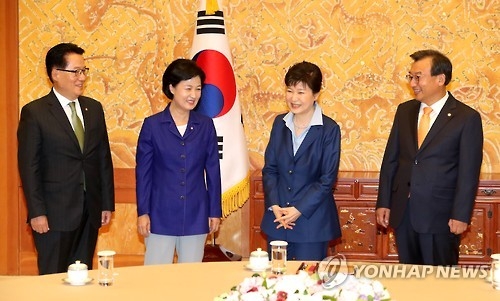