SM aims to open "SMT Tokyo," the Japanese branch and the first overseas version of SMT Seoul, within six months, according to the officials, although the precise opening schedule has not yet been set.

"Starting with Japan, we plan to open restaurants in Los Angeles as well," one official said.

The agency represents an impressive number of top celebrities, including leaders of "hallyu," which is the wave of Korean pop culture across the world, such as Girls' Generation and EXO.

SMT Seoul adopted what the company described as Seoul-style tapas, offering Korean, Japanese and Chinese cuisines in the form of the Spanish appetizers. Each floor of the five-story restaurant is designed in different concepts, varying from a casual pub-style eatery to a formal course menu restaurant and VIP dining. The restaurant only accepts guests who make reservations.

The restaurant's success was not entirely expected, with some doubting whether an entertainment company would be able to take root in another business. SM officials said customers range from young to old, including housewives. Celebrity sightings at the restaurant also likely helped the business.

"Our goal has been to make the company's 20th anniversary last year our starting point and move on from leading the K-pop culture to launching creative content unique to SM by reinterpreting different cultures," the company official said. "We will explore this new fusion called Seoul-style tapas and lead the K-food dining culture." 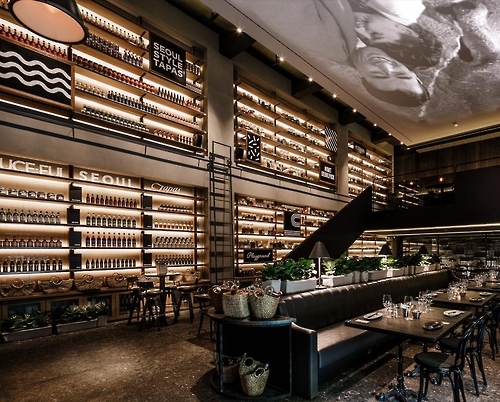 Talent agency SM to take its restaurant business to Japan

Talent agency SM to take its restaurant business to Japan