ICT exports reached US$14.13 billion last month, down 2.1 from $14.43 billion a year ago, according to the data compiled by the Ministry of Trade, Industry and Energy.

The August figure extended its losing streak to 10 straight months starting in October last year, but also marked the slowest on-year decline since the same month when it posted a 1.6 percent drop.

For the first eight months of the year, ICT exports shrank 8.9 percent on-year to $103.53 billion.

Exports of ICT goods accounted for 35.2 percent of the country's $40.13 billion in overall shipments abroad over the one-month period.

South Korea's exports rebounded 2.6 percent in August to land in positive territory for the first time in 20 months on the back of increased working days.

Imports of foreign ICT products edged down 0.1 percent on-year to $7.53 billion last month, with the country logging a trade surplus of $6.59 billion in the sector.

But overseas sales of handsets plunged 18.1 percent to $1.98 billion and flat screens saw their exports retreat 6.8 percent to $2.54 billion.

By region, shipments to China and the United States dipped 3.7 percent and 5.2 percent on-year, respectively, with those to the European Union dropping 5 percent in August.

Exports to Vietnam, on the other hand, soared 31.1 percent and those to Japan rose 3.6 percent over the cited period, the data showed. 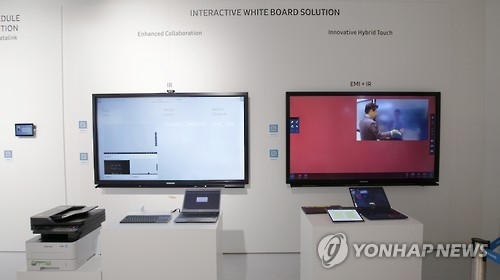