Hyundai Motor said it also had contracts to deliver an additional 2,000 units of the vehicle.

The automaker said earlier it aims to sell at least 4,800 Ioniq Electric units in the country this year alone. 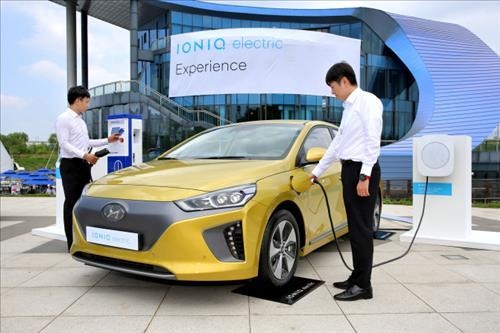 Hyundai began the sale of the Ioniq line, which includes the firm's first pure electric vehicle built on a dedicated platform, in late June. In addition to the electric version, the Ioniq also comes as plug-in hybrid and traditional hybrid models.

The Ioniq Electric is said to be capable of traveling up to 191 kilometers on a single charge, which is better than the 100 km range of other EVs on sale here.

Hyundai wants to take up more than 60 percent of the total electric car sales in South Korea this year, where around 8,000 electric vehicles will be on the market by December.

Hyundai Motor aims to establish some 120 charging stations nationwide at department stores, shopping malls and tourist venues by the end of the year.