SEOUL, Sept. 12 (Yonhap) -- South Korea's current account balance in the transport sector hit US$1 billion in deficit this year up to July as demand shrank and exports lulled, according to the Bank of Korea on Monday.

South Korea made $15.23 billion from transport activities in the January-July period, but payments in the sector amounted to $16.24 billion, the central bank's tally showed.

The deficit is the first for the measured period since the Bank of Korea began compiling the data in January 2006, and the largest in the deficit amount.

The transport index covers people and goods crossing borders by sea or air plus postal services and services provided in air.

On monthly terms, after recording the first deficit ever in December last year of $1 billion, the loss streak ran consecutively, reaching $300 million in July.

The slump in the shipping business was stark. While the air transport index for the January-July period marked a $32 million surplus, the index in the shipping business ended $894 million in red. Passenger transport by sea fared better, recording $200,000 in black, while the cargo service surplus stopped at $3.2 billion, about half of what it was during the same period last year.

Profit from sea cargo transport fell 28.2 percent in the measured months this year from the same period last year.

Industry analysts said a global economic slump had visibly dampened South Korea's exports, worsened by falling shipping fees. In January this year, the cost of shipping 20-feet containers from the southeastern port of Busan was 1.59 million won (US$1,430), a fall of 1.4 percent compared with the same month the previous year. 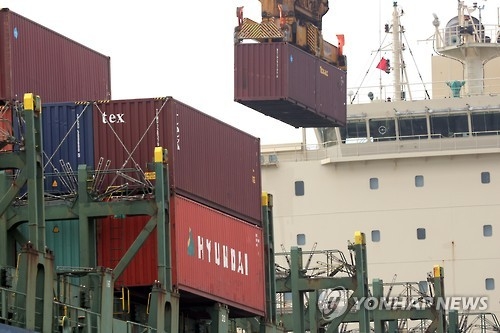