SEJONG, Sept. 12 (Yonhap) -- The South Korean government on Monday said a local company's water purifiers were found to have mechanical defects in cooling components that tainted water with powdered nickel and possibly cause serious health risks to users.

Bits of nickel were discovered in dispensed water in three ice maker/water purifier models manufactured and sold by Coway Co., the country's leading water purifier maker, between April 2014 and December 2015, with the number of users involved estimated at about 87,000.

The problem came to light after a number of consumers filed a lawsuit against the water purifier maker months ago, demanding a combined 1.6 billion (US$1.4 million) in damages for the defective products.

In July, the South Korea government formed a fact-finding committee comprising officials and experts from the Ministry of Trade, Industry and Energy, the Ministry of Food and Drug Safety, and other agencies to scrutinize the case.

According to the inspection results, the nickel coating of the ice-making system was damaged during the assembly process of the water purifiers, so that the powdered metal was mixed with water when consumers drank water from the device.

It is widely known that breathing nickel dust can lead to lung cancer, but few studies have been conducted on the impact of the oral intake of the metal.

"We ask consumers not to use the problematic products as nickel can cause some health problems," the committee said in a release. "The government will order the company to recall all the products sold across the nation."

The government said there are still many people using the disputable purifiers although the company said it has collected around 96 percent of the sold products.

The Coway case comes amid public anger over toxic humidifier sterilizers sold by the British firm Oxy Reckitt Benckiser, which have claimed more than 100 lives in South Korea. 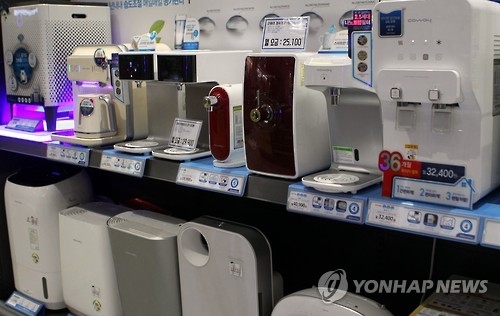