SEOUL, Sept. 12 (Yonhap) -- South Korea's National Assembly Speaker Chung Sye-kyun will leave for the United States on Monday to strengthen cooperation between the legislatures of the two countries in promoting peace on the Korean Peninsula and beyond, his office said.

Chung is to be accompanied by the floor leaders of the ruling Saenuri Party, the main opposition Minjoo Party of Korea and the People's Party -- Chung Jin-suk, Woo Sang-ho and Park Jie-won, respectively.

It is the first time that a parliamentary chief has traveled overseas together with the floor leaders of the ruling and opposition parties.

His eight-day trip to the U.S. is expected to focus on stressing the importance of the South Korea-U.S. alliance in coping with Pyongyang's escalating nuclear threats. On Friday, the communist state conducted its fifth and most powerful nuclear test, sharply raising cross-border tensions.

On Tuesday, the parliamentary leaders will meet with scholars from major U.S. think tanks in Washington D.C., such as the Center for Strategic and International Studies and the Brookings Institution, to discuss the evolution of the bilateral alliance and ways to deepen it.

Following the session, they are set to hold a meeting with Republican Speaker of the House Paul Ryan to exchange views on the volatile security environment of the Korean Peninsula, Northeast Asia, and other issues.

On Thursday, Chung will fly to New York. At the Korea Society, a non-profit organization dedicated to enhancing ties between the two countries, the speaker is to deliver a speech on the bilateral alliance and its role in promoting peace in the region.

While in New York, the National Assembly head is also scheduled to meet with U.N. Secretary-General Ban Ki-moon for talks over inter-Korean relations and other issues such as sustainable development.

Chung's schedule to the United States will wrap up with a visit to Silicon Valley, where the six-term lawmaker is to offer his encouragement to South Korean entrepreneurs and scientists working in the high-tech cluster. 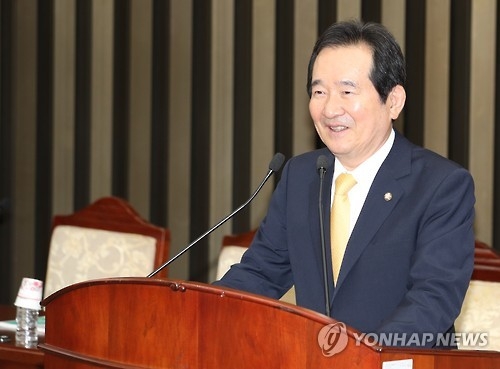