Jeonbuk Hyundai Motors will host Shanghai SIPG on Tuesday in the second leg of the home-and-away quarterfinals at Jeonju World Cup Stadium, while FC Seoul will face Shandong Luneng FC at Jinan Olympic Sports Centre in Jinan, China, on Wednesday.

Jeonbuk and Seoul are the two surviving clubs from the K League Classic, while Shanghai and Shandong both represent the Chinese Super League. South Korean clubs have lifted four AFC Champions League (ACL) trophies in the last 10 years, the most among any other country, but they haven't won the premier Asian club competition since 2012 when Ulsan Hyundai FC were crowned the champions.

If both Jeonbuk and Seoul advance, it will be the second time in ACL history for two South Korean clubs to go head-to-head in the semifinals. Previously, Jeonbuk and Ulsan Hyundai clashed in the 2006 ACL semifinals.

Jeonbuk and Seoul, however, are in different situations following their first legs last month.

Jeonbuk picked up a scoreless draw against Shanghai on the road, while Seoul collected a 3-1 win against Shandong at home.

Seoul can clinch a spot in the semifinals with a draw or even with a loss by a one-goal margin. Jeonbuk, however, must collect a victory against Shanghai at home and any draw with goals will eliminate them due to an away goal rule. Another scoreless draw means that Jeonbuk and Shanghai will have to enter extra time.

Jeonbuk, the 2006 ACL winners, are undefeated in the domestic league this season. They haven't lost their last 29 matches in the K League Classic, marking 17 wins and 12 draws to top the league table.

Jeonbuk, looking for their first ACL semifinals appearance since 2011, have been dominant at home this season. They've collected 11 wins and three draws in the K League Classic so far. In this ACL, Jeonbuk have won three times and drawn once.

In their latest league action against the Jeonnam Dragons on Saturday at home -- where they threw away a two-goal lead to draw 2-2 -- Jeonbuk rested some of their key players to prepare for the clash against Shanghai. Goalkeeper Kwoun Sun-tae and midfielders Kim Bo-kyung and Lee Jae-sung didn't feature, while veteran striker Lee Dong-gook only played about 30 minutes as a second-half substitute.

Against Jeonbuk, Shanghai will be without Brazilian striker Elkeson, who is suspended due to yellow card accumulation, and injured Argentine midfielder Dario Conca. However, the Chinese club will likely play Hulk, who made an impressive return from an injury last week.

The 30-year-old Brazilian attacker, who joined Shanghai from Zenit Saint Petersburg for a record 55 million euros ($61 million) in June, scored two goals in his team's 2-2 draw against Beijing Guoan on Friday in the Chinese Super League. Hulk only played for 17 minutes for Shanghai before he was sidelined due to a leg injury.

Shanghai, which landed in South Korea on Saturday, are also expected to field attackers Wu Lei and Yu Hai, who both had a taste of South Korean football in their World Cup qualifier on Sept. 1. Yu scored a goal in China's 3-2 loss. 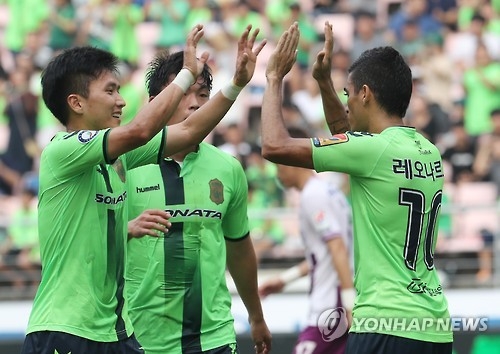 Seoul are considered favorites to reach the semifinals against Shandong after they enter the second leg with a two-goal cushion. The 2013 ACL runners-up boast seven wins, nine draws and two losses against Chinese clubs at the ACL.

Seoul beat Shandong in Jinan for their Group F match in March. Back then, Seoul routed the hosts 4-1 thanks to a double from Carlos Adriano, while Dejan Damjanovic and Go Yo-han scored a goal apiece.

But Wednesday's match can be different because Seoul this time will visit the eastern Chinese city with a new skipper. Hwang Sun-hong, who took the helm in June after Choi Yong-soo left for Jiangsu Suning, will have his first ACL away match as Seoul head coach.

Hwang, however, is not a complete stranger when it comes to playing at Jinan Olympic Sports Centre. He previously led the Pohang Steelers to a 4-2 victory against Shandong in Jinan at the 2014 AFC Champions League group stage.

Hwang uses different tactics from his predecessor. Choi liked to use the back-three system, while Hwang prefers to place four defenders.

The one constant is the status of Seoul's two foreign strikers. Adriano is currently the tournament leading scorer with 12 goals, and Damjanovic has also scored five times.

Now in second place in the K League Classic, Seoul squandered a two-goal lead to draw 2-2 against Ulsan Hyundai on Sept. 3 and picked up a 1-0 loss to league worst Incheon United on Saturday. Hwang's squad arrived in China on Monday.

Shandong, 12th in the 16-team Chinese Super League, are expected be aggressive at home as they need to overcome a two-goal deficit. With Italian striker Graziano Pelle up front, Argentine midfielder Walter Montillo will lead the attack.

Montillo, who delivered Shandong's only goal in the first leg with a free kick, also scored in his team's 1-1 draw against Changchun Yatai on Saturday.

Shandong, led by German tactician Felix Magath, will be without midfielder Jin Jingdao who has also been provisionally suspended by the AFC for 60 days for a doping violation. He tested positive for a banned substance following the first leg against Seoul, during which he was sent off with two yellow cards. 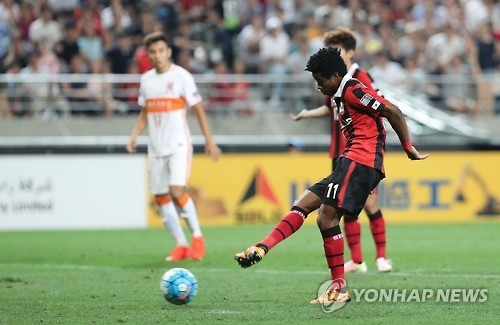