PYEONGTAEK, South Korea, Sept. 12 (Yonhap) -- The United States has postponed its planned flight of a supersonic bomber to South Korea aimed at showing its defense commitment to its key ally due to unfavorable weather conditions, the U.S. Forces Korea (USFK) said Monday.

Two B-1B Lancers were scheduled to fly over the skies of South Korea at around 10:00 a.m. on Monday, flanked by an entourage of one South Korean F-15K and one U.S. F-16 fighter jets, according to the USFK.

"Due to inclement weather conditions, the engagement at Osan Air Base scheduled for today has been postponed. More information on flight will be available soon," USFK spokesman Christopher Bush said in a statement at an air base in Pyeongtaek, 70 kilometers south of Seoul.

On Friday, North Korea detonated its fifth nuclear device in the face of strong protest from the international community to halt its weapons of mass destruction programs. 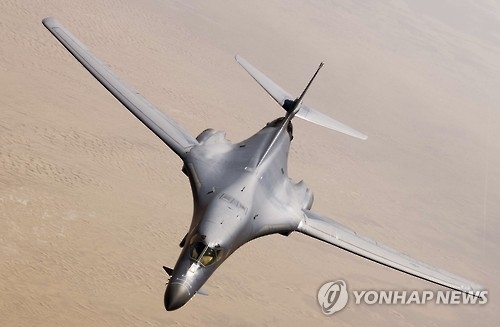 U.S. delays planned flight of B-1B bomber to S. Korea due to winds

U.S. delays planned flight of B-1B bomber to S. Korea due to winds