The group, led by former Saenuri Party floor leader Won Yoo-chul, made the proposal during its emergency session at the National Assembly, where the participants called for "measures equivalent to South Korea's own nuclear armament."

"We propose establishing a parliamentary panel that involves both ruling and opposition parties, in order to craft effective measures to make sure that North Korea's (threats from its) nuclear test will no longer be disregarded," the group said in a statement.

The session was held three days after Pyongyang sharply raised cross-border tensions with its fifth and most powerful nuclear test. The North's latest provocation has added to the growing calls for South Korea to develop its own nuclear arms.

The group said that at the envisioned panel, lawmakers can explore ways to prevent the North's additional nuclear provocations. It said preventive measures include redeploying the U.S. tactical nuclear weapons to the Korean Peninsula and introducing a nuclear-powered submarine.

"North Korea's fifth nuclear test is breaking peace and stability in Northeast Asia, and fueling fears and anxieties," Rep. Won said during the session. "We (South Korea) should devise all possible ways to deter (North Korea), including South Korea's nuclear armament, from a standpoint of self-defense."

"What the Kim Jong-un regime can obtain from its development of nuclear arms is stronger international sanctions and isolation, and it would only hasten its self-destruction," the defense chief said. "We will maintain a full readiness posture to sternly and strongly respond to any type of provocations."

The ruling party has been split over the idea of the country's nuclear development.

Some argue that South Korea's nuclear armament is the only effective way to deter a provocative North Korea. Others, however, say that the country's nuclearization is unrealistic as it runs counter to its long-held denuclearization principles and could trigger international sanctions and isolation.

"For South Korea to be armed with nuclear weapons, it should withdraw from the Nuclear Non-Proliferation Treaty," Saenuri Rep. Yoon Sang-hyun told Yonhap News Agency over the phone. "Considering the relations with the U.S. and possible international economic sanctions, the government cannot make a decision toward nuclear armament." 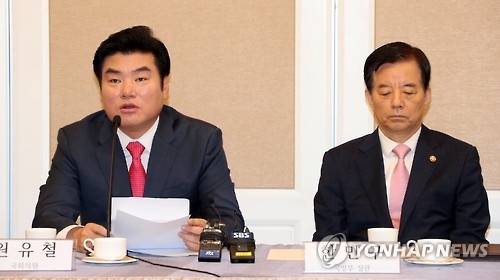