SEOUL, Sept. 12 (Yonhap) -- The national archery governing body on Monday unveiled a new competition pitting the top homegrown archers against each other this fall.

It will be held from Oct. 20 to 22 in Seoul. An auxiliary venue will be set up at Jamsil Sports Complex for the preliminaries. The quarterfinals, semifinals and final will be held at Olympic Park's Peace Square on Oct. 22.

The competition will take place about two months after South Korea's historic sweep of four archery gold medals at the Rio de Janeiro Olympics. All six Rio contestants -- Chang Hye-jin, Ki Bo-bae and Choi Mi-sun for women, and Ku Bon-chan, Kim Woo-jin and Lee Seung-yun for men -- will be in action.

They will be among the 160 archers -- the top 80 for men and women -- in the field, according to the KAA. There will be men's and women's individual events, but no team competitions.

South Korea has been a dominant force in Olympic archery for decades, leading all nations with 23 gold medals, and its talent pool is so deep that a domestic competition may have the intensity of an international event. 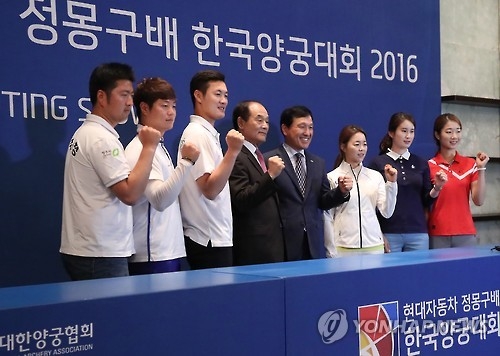 "As great as our nation has been in archery, we've felt all along that we didn't have a defining competition for the sport," Kim said at a press conference announcing the event's inauguration. "We hope this competition will make everyone in archery feel proud of their sport and make archery more fan-friendly and entertaining."

"They'll be able to qualify based on rankings points earned from other domestic events, and have a chance to go up against Olympic heroes," Jang said. "And we will give them hopes that one day, they'll be able to compete in the Olympics, too. And it may also teach veterans a lesson that if they don't try hard enough, they can easily lose."

Jang explained the KAA will decide after the first event whether to hold it annually or biennially.