SEOUL, Sept. 12 (Yonhap) -- Only weeks after completing a historic title sweep at the Rio de Janeiro Olympics, six South Korean archers could be forgiven for relaxing and savoring their accomplishments.

Yet they understand as well as anyone that they can't afford to do that, not with some key domestic competitions on the horizon.

South Korea won all four archery gold medals at stake in Rio -- men's and women's individual and team titles. Ku Bon-chan and Chang Hye-jin were the double gold medalists in the men's and the women's events, respectively, while Ki Bo-bae added an individual bronze to her team gold.

Ku learned the hard way that letting his guard down can be costly. At the national championships last week, Ku was eliminated in the round of 32 in the individual event, losing to little-known Kwon Dae-hyun.

South Korea has dominated archery in the Olympics, with 23 gold medals leading all countries, and its talent pool is so deep that making the national team is often regarded as more difficult than reaching an Olympic podium.

The world No. 1 said his upset loss was a painful reminder. 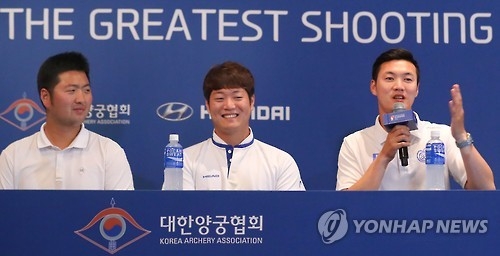 "It was my first domestic competition after the Olympics, and though I tried to prepare the best I could, it was every bit as difficult as I'd anticipated," Ku said Monday. "It has forced me to bear down even more and focus on training going forward."

Ku and the rest of his Olympic teammates gathered for a press conference announcing the launch of a new national event. Titled Hyundai Motor Chung Mong-koo Cup Korea Archery Competition -- after the chairman of the Hyundai Motor Group and honorary president of the Korea Archery Association -- the Oct. 20-22 event will bring together 160 archers across the high school, collegiate and senior levels. The six medalists will all be in action.

The two other male archers, Kim Woo-jin and Lee Seung-yun, also failed to win a medal at the national championships, as they both lost in the quarterfinals.

Kim said he has been trying to put his Olympics in the past.

"The Olympics is already over, and I've been trying to train as consistently as I can," the world No. 2 said. "Every competition has an equal amount of importance to me."

Chang, who rose from No. 6 to No. 4 in the women's rankings after Rio, admitted she's had a more difficult time coming down from her cloud.

"The excitement from the Olympics still lingers with me," said Chang, who finished fourth at the national championships after losing to a collegiate player in the bronze medal contest. "I haven't had as much time to train as I would like. I think I have to work harder for the upcoming competition."

Asked to name her biggest rival, Chang said with a smile, "Well, I just lost to a college player. I think the unknown players will be the toughest to beat."

The Hyundai Motor event will have the largest purse at a Korean archery event, with 440 million won (US$396,000) in total and 100 million won for the champion. The Olympic archers said it will surely serve as a major carrot for everyone in the field.

"I think it will be a huge motivating factor," said Lee, the men's world No. 6. "And it will naturally lead to a high level of competition."

Ki, who has four medals from the past two Olympics, said more so than money she's looking forward to taking on up-and-coming archers who will be out to take down giants like herself.

"I've not been training all that much after the Olympics, but I have to crank up my intensity for this event," she said. "No matter whom I face, I think my biggest rival will always be myself. I believe I've come this far because I've won all those battles against myself."