Many Korean women accustomed to modern garments had dismissed the dragging skirts and cropped cross-collar jackets as being uncomfortable, wearing them only for special occasions like weddings, a child's first birthday or other big family events. 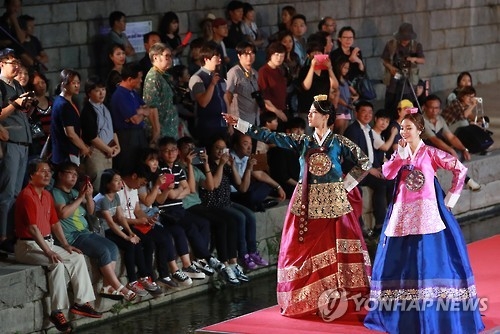 But the perception has started to change, as a growing number of young people have been sharing their experiences of going on outings to ancient palaces and traditional villages in colorful hanbok through social networking sites like Twitter and Instagram.

On the design front, emerging designers have presented fusion garments by making the women's skirts shorter and men's trousers slimmer, therefore more practical and easy to wear for a modern lifestyle.

While hanbok shops are mostly concentrated in traditional markets and Insadong, an art and antique street in downtown Seoul, local department stores have increasingly embraced the long-estranged traditional dress to capitalize on the latest trends. 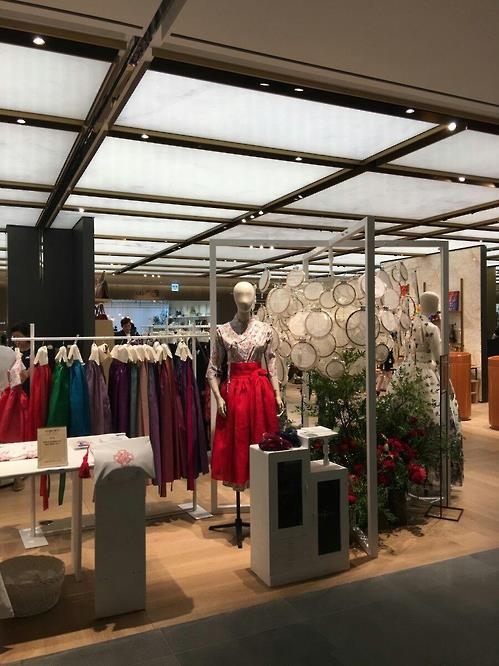 Kim has made a splash in the local fashion scene by turning the traditional "cheollick" official male robe into a woman's dress. Cheollik, a skirted men's outer robe worn by government officials or noblemen going on field trips, was adapted into a women's one-piece dress, a totally new format for the traditional female costume characterized by the skirt-jacket ensemble.

"We have opened the new store in Shinsegae Department upon its request and received positive responses from various groups of customers. Women in their 20s, 30s and 40s are our main customers and the cheollik one-piece is the most popular item," an official at Tchai Kim told Yonhap News by phone. "I think department stores opening hanbok shops reflects that hanbok is not a short-lived fad, but an emerging new trend that can appeal to a wider customer base."

Daegu Department Store, a local department based in the southern city of Daegu, last month opened a "chima jeogori" pop-up store. "Chima" is a full-length empire-waist airy skirt, and "jeogori" is a cropped cross-collar jacket with two long ties. 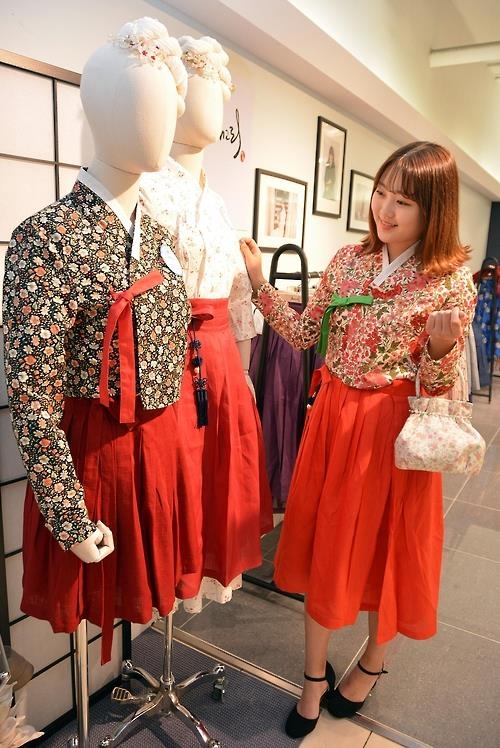 According to officials, the store has been frequented by female customers in their teens and 20s who want to try out different designs of modernized hanbok.

In June, Hyundai Department Store also opened a pop-up store in its Pangyo branch south of Seoul, which was a collaboration project by Leesle, a lifestyle hanbok brand, and Hite Jinro, a local distiller.

Industry watchers expect the diversified retail channel to further boost the popularity of hanbok among those who appreciate the evolution of traditional heritage. 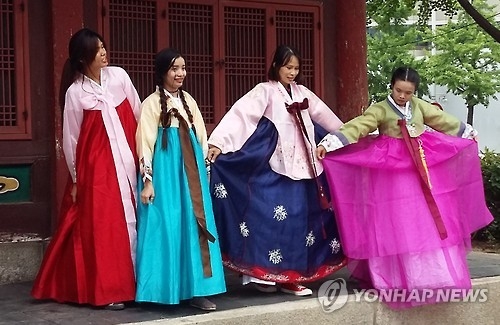 According to Shinhan Card's Trend Institute, the ratio of hanbok buyers and lenders aged below 24 jumped from 2 percent in 2013 to 6 percent in 2015. While demands for hanbok usually surge during national holidays or wedding seasons, hanbok use by 20-somethings has steadily increased throughout the year, it said.

"Hanbok is a unique material for youngsters who want to differentiate themselves from others. Wearing hanbok has become a pastime among open-minded young people who like to take pictures with foreign travelers in sightseeing places," the institute said.

"The diversified distribution channels have also fueled the latest trend, allowing people to borrow hanbok not only offline but also online and through SNS sites." 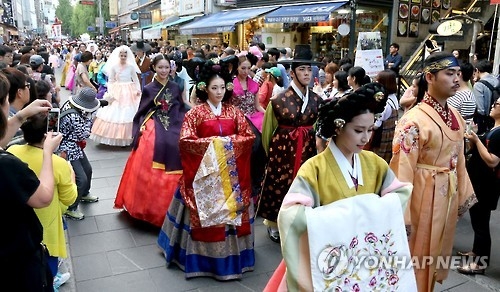