SEOUL, Sept. 12 (Yonhap) -- The Seoul bureau of environmental group Greenpeace said Monday it has filed a suit against the South Korean nuclear security watchdog to nullify a plan to build two more nuclear reactors in the country's southeastern city of Ulsan.

In June, the Nuclear Safety and Security Commission allowed the state-run Korea Hydro and Nuclear Power Co. (KHNP) to construct Shin Kori No. 5 and No. 6 in the industrial city.

The international group said it filed the case with the Seoul Administrative Court on Monday along with 559 citizens who joined the suit as plaintiffs.

"The commission gave a nod to the plan without properly considering the risk the new plants could pose in the region," said lawyer Kim Yeong-hee, who represents the plaintiffs. "It also failed to fulfill procedural requirements such as discussing with nearby residents in advance."

The addition will bring the total number of South Korea's nuclear reactors to 30, including four currently under construction.

As a member of the Nonproliferation Treaty, South Korea keeps nuclear reactors only for energy use, not for weapons purposes.

The KHNP has said it plans to finish the construction of the new reactors by 2021 and 2022, respectively. 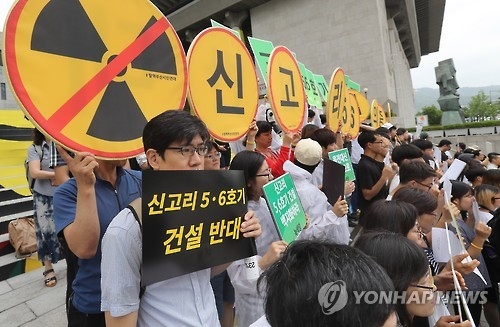