SEOUL, Sept. 12 (Yonhap) -- The new wireless earbuds from Apple Inc., AirPods, have been getting a skeptical reception from some industry watchers and users in South Korea, mainly because of their relatively short battery life and high price.

Unveiling the new iPhone last week, Apple showed that it had ditched the ubiquitous headphone jack for the smartphone. While Apple described the removal of the 100-year-old audio jack as "courageous," some critics raised questions about the sound quality of wireless earbuds.

The AirPods will be available for purchase from next month.

Due to the limited data volume of a wireless trans-receiver, users will find it difficult to enjoy high-quality music with the AirPods, according to industry watchers. 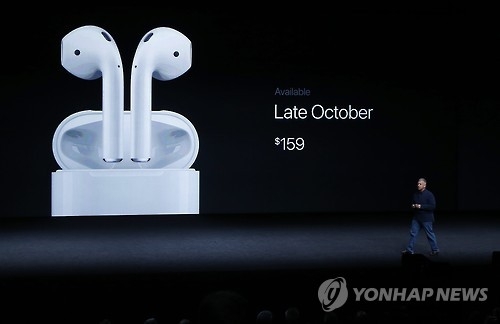 "All the groundbreaking things AirPods can do are driven by the custom-designed Apple W1 chip. It produces extremely efficient wireless for a better connection and improved sound," Apple said.

Battery life is seen as another worrisome issue.

The AirPods deliver 5 hours of listening time on a single charge, compared with about 10 hours for other wireless headsets.

"Currently, there are a few customers who have raised the issue of the battery life of wireless earphones. But the AirPods have a different situation," an official at a local earphone industry told Yonhap News Agency by telephone.

Apple said the charging case would give users more than 24 hours of listening time.

"Although a charging case is offered, it remains to be seen how Apple could minimize consumers' inconvenience," the official said.

The price of the AirPods is set at 219,000 won in South Korea. The price is similar to that of a low-end smartphone.

Apple said the AirPods provide "great-sounding music, movies, and more to your ears" and allow users to talk to Apple's digital assistant Siri.

However, some critics said the AirPods may become a luxury accessory for the iPhone if they fail to prove their sound quality.

The AirPods "are an attempt by a company which has massive fans to buy its product regardless of the price," said another official at a local earphone industry.

"I can make a correct assessment after I use the product for a long time," the official said.
(END)