According to Jeju Seobu Police Station, the tourists -- six men and two women -- are suspected of assaulting the 53-year-old owner of the restaurant, identified only by her surname Ahn, on the southern resort island of Jeju on Saturday, causing her injury.

The incident took place after the 53-year-old Ahn prohibited the tourists from drinking alcohol they brought from outside, according to police.

They allegedly attacked the victim when she asked them to pay for the food they ordered before leaving, police said. The suspects are also accused of assaulting three others who were trying to stop them, including Ahn's son.

The restaurant owner is currently being treated at a local hospital, according to police.

Police said they arrested all eight at the scene and are planning to ask a local court to issue warrants to formally arrest five of the suspects. The other three have been put under a travel ban due to the possibility of fleeing, they said.

"The number of crimes committed by foreigners is rapidly increasing on the island," a police officer said, asking not to be named. "We will firmly exercise governmental authority to make sure foreign tourists don't get away with committing crimes." 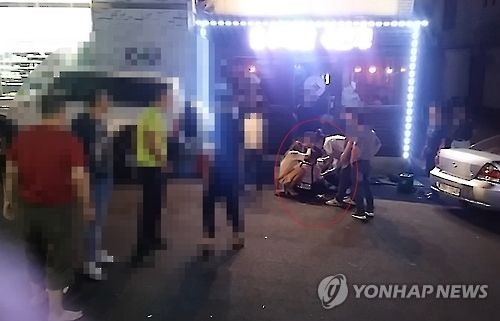