Jeonbuk will host Shanghai in their second leg of the AFC Champions League (ACL) quarterfinals Tuesday at Jeonju World Cup Stadium in Jeonju, North Jeolla Province. They played to a scoreless draw in the first leg in China last month.

Jeonbuk must collect a victory to clinch their spot in the ACL semifinals because any draw with goals will eliminate them due to an away goals rule. Another scoreless draw will force both teams to play extra time.

Choi, however, said they are not thinking of playing an additional 30 minutes after regulation.

"We will finish the match in 90 minutes," Choi said at the press conference at the match venue. "We want to reach the semifinals with a victory."

Choi, who led Jeonbuk to win the 2006 ACL title, said he isn't bothered by the 0-0 draw in the first leg because his team is confident of beating Shanghai at home.

Jeonbuk, looking for their first ACL semifinals appearance since 2011, have been dominant at home this season. They've collected 11 wins and three draws in the top-flight K League Classic so far. In the ACL, Jeonbuk have won three times and drawn once.

"People say a scoreless draw away is not good, but I think not losing on the road puts us in a favorable situation," he said. "We are absolutely strong at home."

Choi said getting the first goal will be critical to winning the match.

"If we concede the first goal, we will have to play the game in a rush," he said. "But if we score first, then we can play our game (as we planned)."

Choi said he will ask the players to have a high level of concentration because a small mistake can determine the match result.

"The players know the importance of the match," he said. "Since we have a good atmosphere, we can play a good game and win the match." 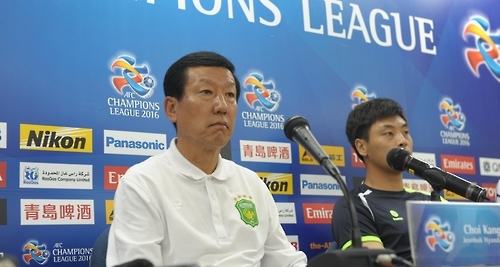