SEOUL, Sept. 12 (Yonhap) -- South Korean experts said Monday the country remains relatively safe from strong earthquakes that can lead to serious damage and major causalities, although expressing concerns that the frequency of tremors that are being felt felt by people have increased over the past few years.

On Monday, a record-breaking earthquake was detected in the southern region near Gyeongju, which lies 371 kilometers southeast of Seoul. South Korea's meteorological agency said the 5.8-magnitude earthquake was strong enough to be felt throughout most parts of the country, even causing some people to evacuate buildings.

The quake was preceded by a 5.1-magnitude tremor detected earlier in the same general location south of Gyeongju.

"The latest earthquake seems to be linked to the massive quake that struck Japan in March 2011," said Chi Heon-cheol, a researcher at Korea Institute of Geoscience and Mineral Resources (KIGAM) said, adding there has been a series of aftershocks of that major earthquake not only in the island nation but around the Korean Peninsula.

"Despite most earthquakes not being too dangerous, it is still worrisome that the numbers of such shocks have been rising," Chi adding that number of tremors being detected throughout the country is higher than previously anticipated. 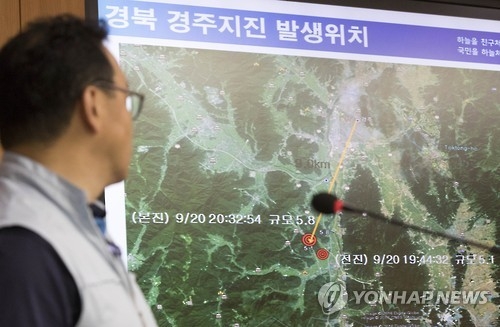 The researcher said the latest earthquake observed was caused by the strike-slip fault, adding that a release of energy from a side of the fault led to the quake felt across the country.

Chi, however, ruled out the possibility that the kinds of tremors detected this time can lead up to a major earthquake that can cause serious damage.

"There are no possibilities," Chi claimed. "The earthquakes observed Monday night are nothing new for the country, and there were previous cases of tremors hitting the same area.

"Although there can be earthquakes under 5.5 magnitude down the road, the overall geological structure in and around South Korea is not conducive to a major earthquake," the KIGAM researcher stressed.

Reflecting this view Son Moon, a professor of geology at Pusan National University said the latest earthquake was caused by the well known Yangsan fault zone that has shown activity in the past.

"It marks the first time that an earthquake took place on the fault zone since 1978," the scholar said. He claimed that the fault area in the zone is not like those that affect Japan, which have been cited for causing serious damage.

Son added Monday's earthquake did not indicate that South Korea will face a stronger shock in the near future, although the country still needs to pay more attention to the safety of nuclear reactors in the region.

"As there are nuclear reactors and radioactive waste disposal facilities in Gyeongju, we need to be more cautious," Son said.

He then said that while no significant damage is expected from a magnitude-5.1 earthquake, buildings without proper quake-proof design can collapse when a magnitude 5.5 or higher quake strikes.

Hong Tae-hyung, a professor at Yonsei University, meanwhile, said more studies are needed to be done to better gauge potential earthquakes that can occur in and around South Korea.

"The Gyeongju earthquake was the strongest one ever recorded in the country," Hong said, pointing out that the latest tremor can be considered a "major" seismic event.

"The aftershocks of a major earthquake show a repetitive pattern of expansion," the academician said. "Monday's earthquake shows that the country is in an expanding phase, which can lead to the number of earthquakes rising."

On July 5, South Korea also experienced a magnitude 5 earthquake in the water only 52 kilometers off its southeast coast not far from the industrial city of Ulsan.

In a previous research, Hong forecast that a magnitude-7 artificial earthquake in North Korea, caused by an underground nuclear detonation can result in the eruption of Mount Paektu along the North Korea-China border. 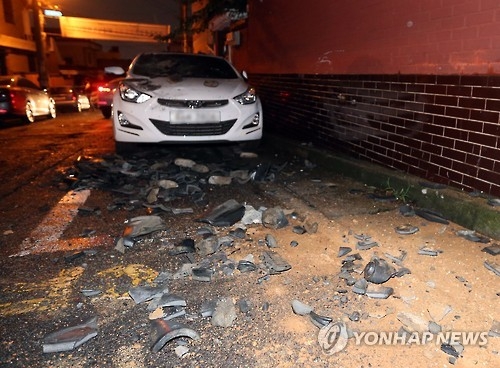