WASHINGTON, Sept. 12 (Yonhap) -- The United States will do everything it can to keep pressure on North Korea, Treasury Secretary Jack Lew said Monday, stressing it is unacceptable for the communist nation to have nuclear weapons.

Lew, who overseas U.S. financial sanctions, made the remark during a Council on Foreign Relations discussion, as the U.S. and other countries consider additional sanctions on Pyongyang for conducting its fifth nuclear test in defiance of the international community.

"North Korea is an enormous challenge. We're going to do everything we can to try and keep the pressure on North Korea. It's unacceptable for North Korea to have a nuclear weapon," Lew said.

"They have done more testing both of nuclear weapons and of missiles in recent months in a way that has the world's attention clearly focused, and we will continue to sharpen financial tools as we can. The goal is to change the policy," he said.

Unilateral sanctions included blacklisting the entire North Korea as a primary money laundering concern, a powerful sanction designed to cut off the provocative regime from the international banking system by warning banks around the world they could be blacklisted if found to be doing business with Pyongyang.

Lew said that sanctions have effectively cut North Korea off from the global economy as countries around the world, including China, have rendered unprecedented cooperation in putting tougher sanctions in place.

"A lot of the flows between China and North Korea are for humanitarian goods, but there's also some leakage there in terms of other support for North Korea's economy," he said.

Lew also stressed the importance of China's role in carrying out sanctions.

"Having them follow through and implement those sanctions is something we press very hard on. We're not taking any option off the table. We can continue to review constantly what our options are to put more effective pressure on North Korea," he said.

Relaxing sanctions is possible only when the North changes its policy, he said.

"Sanctions can bring a country to the table, can make them want relief from the sanctions, but they have to choose to change their policy. Iran changed its policy on its nuclear program. There was relief from the nuclear sanctions," Lew said. 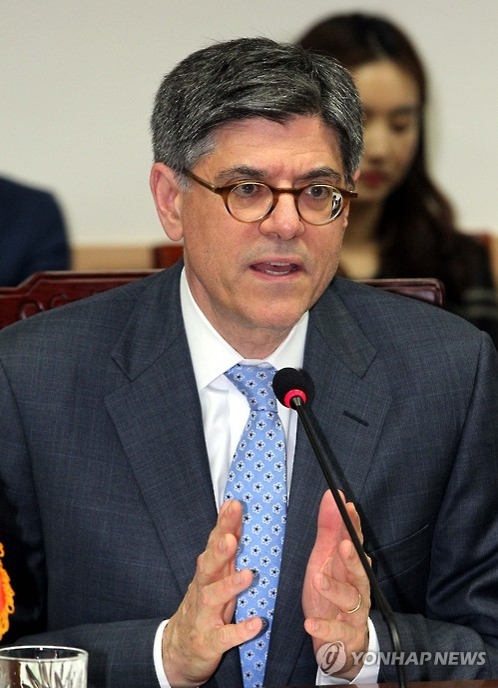 Treasury secretary: U.S. will do everything to keep pressure on N. Korea

Treasury secretary: U.S. will do everything to keep pressure on N. Korea