WASHINGTON, Sept. 12 (Yonhap) -- North Korea is capable of building seven nuclear warheads a year in addition to the existing stockpile of fissile material for some 20 bombs, and is expected to master the capability to fly nuclear missiles to the U.S. in a decade, a top U.S. nuclear scientist said Monday.

Siegfried Hecker, a Stanford University professor known for having a first-hand look at North Korea's uranium-enrichment facility during his 2010 visit, made the remark in an article to the website 38 North, calling for diplomatic efforts, rather than sanctions, to curb Pyongyang's runaway nuclear and missile programs.

"This test must be viewed with great concern, not for any specific capabilities it may have demonstrated, but as part of this enormous buildup of North Korea's nuclear arsenal," Hecker said, referring to the North's fifth nuclear test.

"Five tests conducted over a ten-year period, sufficiently spaced that the test results can inform the next test, are deeply alarming," he said. "What are the greatest threats from the rapidly expanding North Korean nuclear program? Left unchecked, Pyongyang will likely develop the capability to reach the continental United States with a nuclear tipped missile in a decade or so." 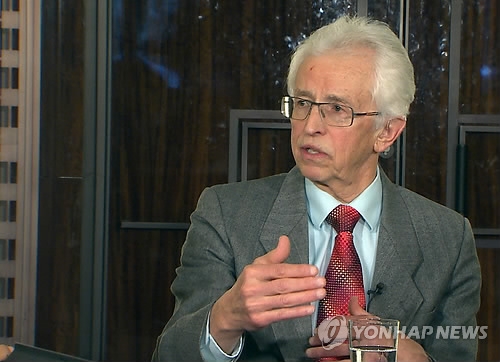 Hecker said the North is believed to be capable of producing seven nuclear bombs worth of fissile material a year at the Yongbyon nuclear complex -- one bomb worth of plutonium from its 5-megawatt nuclear reactor and six bombs worth of highly enriched uranium.

"With the two successful nuclear tests this year, we must assume that the DPRK has designed and demonstrated nuclear warheads that can be mounted on some of its short-range and perhaps medium-range missiles. Its ability to field an ICBM fitted with a nuclear warhead capable of reaching the United States is still a long way off, perhaps 5 to 10 years, but likely doable if the program is unconstrained," he said.

What's more troubling for now is that its recent nuclear and missile successes may give Pyongyang a false sense of confidence and dramatically change regional security dynamics, Hecker said.

"The likely ability of the DPRK to put nuclear weapons on target anywhere in South Korea and Japan and even on some US assets in the Pacific greatly complicates the regional military picture. That situation would be exacerbated if Pyongyang decides to field tactical nuclear weapons as its arsenal expands and its confidence in its nuclear arsenal grows," he said.

The professor also said that the more the North has nuclear bombs, the difficult it is to secure them in the event of internal turmoil or a chaotic transition. In addition, a financially desperate leadership of the North may risk the sale of fissile materials or other nuclear assets, perhaps to non-state actors, he said.

"So, what to do? The latest nuclear test demonstrates conclusively that attempting to sanction the DPRK into submission and waiting for China to exert leverage over Pyongyang's nuclear program do not work," Hecker said.

"Increasing sanctions and adding missile defenses in South Korea to that mix will also not suffice and make China even less likely to cooperate. What's missing is diplomacy as much as Washington may find it repugnant to deal with the Kim regime," he said.