The event is hosted by the Ministry of Trade, Industry and Energy and is organized by the Korea Trade-Investment Promotion Agency (KOTRA).

Some 70 Chinese investors are participating in the event, up from last year's 34, on the back of the free trade deal between Seoul and Beijing that took effect in December last year.

The ministry said this year's FIW focuses on new-generation industries including renewable energy, information technology convergence and bio-health, as the South Korean government has been making efforts to foster the sectors as new growth engines.

"South Korea is an attractive country that grows steadily despite rising uncertainties in the global economy and is widely linked with a number of big markets through free trade pacts," Vice Trade Minister Jeong Marn-ki said in his opening remarks. "I expect foreign investors to witness South Korea's attractiveness and find new opportunities here."

A KOTRA representative said this year's FIW is aimed at "strengthening global partnership in emerging industries of the future," adding that the 2016 event is the largest of its kind with more than 1,300 participants including 337 foreign investors from 291 companies overseas.

South Korea is an attractive investment destination despite rising business uncertainties at both and home and abroad such as Brexit, the KOTRA representative said.

"Although the South Korean economy is faced with difficulties such as declining exports, increasing FDI is playing an pivotal role in revitalizing the economy," said Kim Jae-hong, president of KOTRA.

According to the government data, new foreign direct investment (FDI) pledged to South Korea came to US$10.52 billion in the first six months of the year, up 18.6 percent from $8.87 billion a year earlier, hitting a new record high.

"South Korea is attractive since not only does it have a strong economic foundation but can also be a gateway to global markets via various Free Trade Agreement (FTA) networks," Park Seong-jun, team leader for foreign investment policy under the ministry, said during a press forum on the sidelines of the event.

Park also said new FDI pledges to the country are focused on new emerging industries, including new materials, bio-health and secondary batteries, noting that there is also a surge of investment in cultural content and tourism.

The FIW is one of the biggest government-led investment relation events in South Korea, aimed at showing the attractiveness of Asia's fourth largest economy for investment. 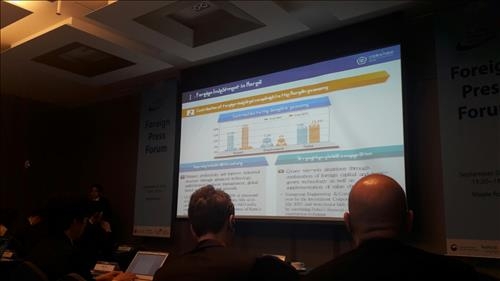