SEOUL, Sept. 28 (Yonhap) -- South Korea's Navy said Wednesday it has recovered the bodies of all three crew members who were aboard a chopper that crashed into the sea off the country's east coast earlier this week.

The funeral service for the three dead soldiers will be held at a military hospital in Seoul on Sunday. Chief of Naval Operations (CNO) Adm. Um Hyun-seong will preside over the service for pilots Kim Gyeong-min and Park Yoo-shin and flight operator Hwang Seong-cheol, the Navy said in a statement.

The country's Navy plans to request the defense ministry to posthumously promote all three deceased servicemen by one rank, it said.

The Navy recovered the pilot's body around 6:00 p.m. Tuesday, the co-pilot's body at 12:21 a.m. in the early hours of the next morning and the body of the third crew member at 4:28 a.m., an official told reporters. He said a remotely operated underwater vehicle was used for the search operations. 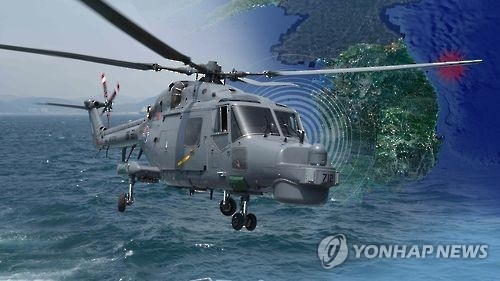 The three Navy personnel went missing after their Lynx antisubmarine helicopter crashed into the East Sea at around 9:05 p.m. Monday during joint drills between the militaries of South Korea and the United States.

The Navy is still in the process of determining the cause of the fatal crash, and has grounded all 20 Lynx helicopters until an investigation is completed.