SEJONG, Sept. 28 (Yonhap) -- South Korea's top economic policymaker denounced unionized workers of the country's railway and subway services Wednesday for staging a joint strike for the first time in 22 years to protest the introduction of a performance-based pay system.

Finance Minister Yoo Il-ho also condemned the labor union of Hyundai Motor Co., the country's biggest carmaker, for orchestrating a walkout in the midst of rising challenges at home and abroad that weigh heavily on the South Korean economy.

"Strikes at the public sectors like subways, railways, banks and hospitals place heavy financial and social burdens on innocent citizens," Yoo said at a ministerial meeting in Seoul.

"(Hyundai Motor's strike) has brought in a loss of 2.5 trillion won (US$2.3 billion) in production and dealt a heavy blow to its subcontractors." 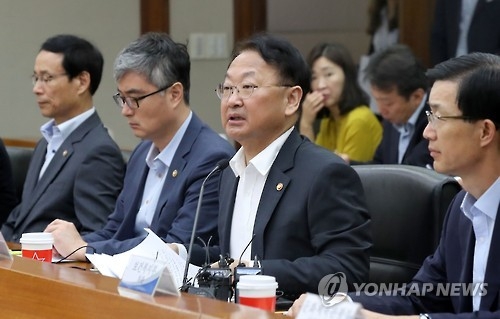 The country has been experiencing a series of collective actions by workers in the public and corporate sectors.

Labor unions of Seoul's two major subway operators and the state-run railway services jointly launched the walkout Tuesday for the first time in 22 years, demanding the government scrap its plan to implement the merit pay system, one of the core campaign pledges of President Park Geun-hye.

Their walkout has not yet caused a serious service disruption, while the management has drawn up measures to cut potential fallout, such as reduced services.

According to the Korea Railroad Corp. (KORAIL), around 90 percent of railway services are in normal operation on Wednesday, with commuting trains and KTX, the high-speed trains, running as usual. But the operation rate of freight trains slumped to 30 percent.

The subway operations in Seoul are also running under normal conditions, although about 30 percent of the unionized workers participated in the strike. 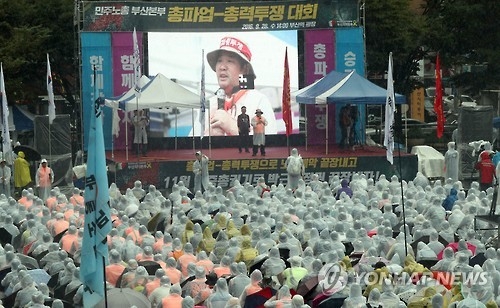 Unionized workers at some state-run hospitals also decided to join the move, while those from financial institutions held a partial strike last week.

On Monday, unionists of Hyundai Motor went on their first full strike in 12 years after rejecting a previously agreed-upon wage deal.

The government estimated that the latest walkout will cause a record 98,000 units in production loss, outnumbering the earlier record of 85,000 units lost during the 2006 strike.

"Industrial output and exports, which have started to show some signs of recovery, will relapse into negative terrain," said Yoo. "We demand the unionized workers of the public agencies and Hyundai Motor go back to their workplaces."

The top economic policymaker said the government will take firm action against the strike in accordance with the law and principles.

But it is highly expected to relapse into negative terrain in September, as South Korea's exports plunged 17 percent in the first 20 days of this month due mainly to a slump in semiconductors and cars.