Party chief Rep. Lee Jung-hyun, who is currently on a hunger strike demanding the resignation of Chung, requested Saenuri lawmakers return to parliament and participate in the 20-day audit which kicked off on Monday.

The ruling and opposition parties clashed after Chung expressed apparent support for the opposition bloc's push to pass a motion to sack a Cabinet minister over alleged ethical lapses.

Due to the stalemate, the regular audit has been nearly paralyzed, especially in committees chaired by ruling party lawmakers.

"I will not sit idle in the face of the collapse of democracy and the parliamentary system established by the people," Lee said, adding he will likely continue with his hunger strike until Chung resigns.

"It is my conviction as well as Saenuri that (lawmakers) must diligently work for the country and people at any occasions," Lee added.

The party chief claimed the opposition is currently trying to fuel confusion and shake the Park Geun-hye administration ahead of next year's presidential race.

Chung then said it is regrettable that regular audit session has been paralyzed by the latest political wrangling.

Rep. Woo Sang-ho, the floor leader of the Minjoo, said he is "dumbfounded" by Lee's hunger strike, adding it is the opposition bloc that should be angered by the president's veto of the dismissal motion.

"I cannot understand the ruling party's anger, as it is the opposition parties that should be furious," Woo said, adding that Lee should try to pave way for negotiations.

Choo Mi-ae, the head of Minjoo, also held a phone conversation with Lee, and asked him to end his hunger strike. A spokesman from the main opposition party said. 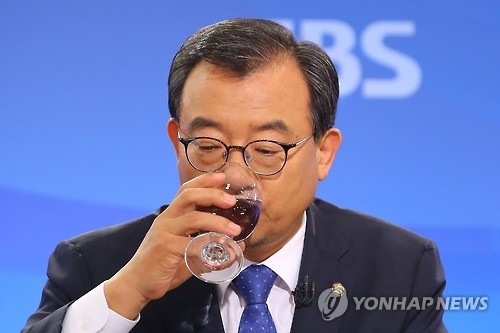