Seoul's unification ministry said it held a ceremony to mark the opening of the Center for North Korean Human Rights Records, attended by Unification Minister Hong Yong-pyo and others including Suh Doo-hyun, the head of the center.

Under the law which took effect on Sept. 4, South Korea can create archives and establish a foundation to support relevant civic groups to shed light on Pyongyang's dismal human rights situation.

The ministry said that the main task of the center is to investigate and compile cases of North Koreans' human rights abuses and handle rights issues of prisoners of war held in the North, separated families and abductees.

The North does not tolerate dissent, holds hundreds of thousands of people in political prison camps and keeps tight control over outside information.

Since taking office in late 2011, North Korean leader Kim Jong-un is believed to have ordered the execution of more than 100 party, military and government officials in a bid to strengthen control over the country through a reign of terror. 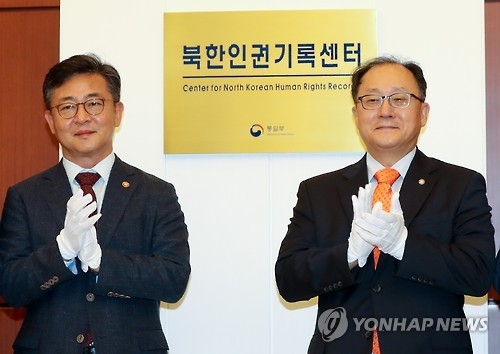