SEOUL, Sept. 28 (Yonhap) -- The Seoul Metropolitan Government said Wednesday around 250,000 tourists are set to visit the city in early October thanks to China celebrating a key holiday, stressing every effort will be made to offer various programs to welcome the visitors.

Seoul said it will operate visitors' centers in major tourist areas throughout the city, including the shopping districts of Myeongdong and Dongdaemun, which are hubs for the country's fashion industry. The centers will provide a variety of information to tourists throughout the Chinese holiday period, which runs from Saturday to Oct. 7.

The city government said it plans to hold various events near these centers, including performances of traditional music and taekwondo.

Industry watchers said the number of shoppers will also increase over the cited period as the holiday falls in line with South Korea's sales season.

"Korea Sale Festa" is the largest shopping and tourism festival spearheaded by the government to draw foreign travelers and aims to jack up weak domestic spending. It will run from Sept. 29 to Oct. 3 throughout the country.

The city said around 20 to 40 percent discounts will be provided to passengers of its tour bus that stops at palaces as well as around the southern district of Gangnam.

To root out irregularities, Seoul said it will roll out a special crackdown on scams by local taxi drivers and shops.

The city said it will continue to engage in efforts to induce more tourists to return to South Korea down the road.

"Only a few years ago, our goal was to host 1 million Chinese tourists. Last year, however, 6 million visited the country," an official from the city government said. "We are gathering feedback from the related sectors to encourage tourists to visit Seoul more than once." 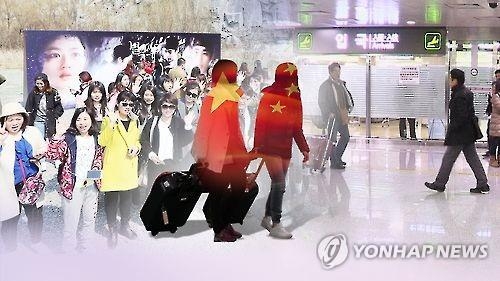