SEOUL, Sept. 28 (Yonhap) -- A group of consumers on Wednesday filed a petition with the prosecution, seeking investigation into the chief of AmorePacific Co., South Korea's leading cosmetic and household goods maker, over some of its toothpastes containing chemicals found in toxic humidifier sterilizers.

A total of 14 consumers who used AmorePacific's problematic toothpastes filed the petition with the Seoul Central District Prosecutors' Office against the brand's chief Shim Sang-bae and other government officials for violation of pharmaceutical laws and dereliction of duties.

The ministry said the products contained 0.0022-0.0044 ppm of CMIT/MIT, far below the Europe's maximum permissible level of 15 ppm, adding they pose no significant health risks as consumers rinse it with water.

They were ordered to be removed from the market, not because the chemicals pose a direct threat, but because they are not allowed to be used in toothpastes under the local law, the ministry said.

Consumers, however, remain unconvinced of their safety as the agents were contained in the humidifier sterilizers that have led to over 100 deaths of consumers here by causing lung problems. 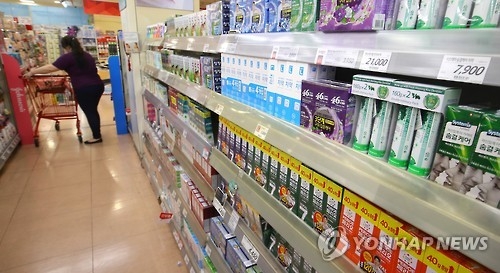