An Ji-man, once a pitcher for the Samsung Lions in the Korea Baseball Organization (KBO), gave 160 million won (US$146,000) to help his friend open an illegal gambling website, they said.

The pitcher, however, denied the allegation, reportedly saying that he lent the money because he was told that his friend was going to use it to open a restaurant.

In July, the Lions asked the KBO to authorize the termination of An's contract after he faced police questioning for his involvement in opening the illegal gambling website. The KBO then temporarily suspended the right-hander from joining baseball activities, saying it would take additional steps as necessary, depending on court decisions.

Earlier this year, An faced a separate investigation from the local authorities for illegal overseas gambling charges. The investigation of this case is currently suspended since the whereabouts of gambling site operators who can possibly give reference on the case have not been clear. Prosecutors had put them on the wanted list.

Several South Korean baseball players were indicted and punished for their misconduct this year.

Two pitchers -- Lim Chang-yong and Oh Seung-hwan -- were indicted and fined for illegally gambling overseas in January. Last month, a local court sentenced NC Dinos pitcher Lee Tae-yang, who was indicted on charges of fixing games, to 10 months in jail with a stay of execution for two years. 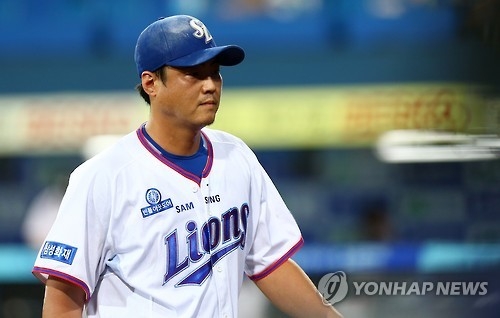