"It is important for the petrochemical firms to take preemptive action to streamline their unnecessary business in preparation for higher petroleum prices and stronger competition from developing countries," Joo said while meeting with CEOs of domestic petrochemicals companies at the Seoul Government Complex.

On the back of cheap oil prices, there has been oversupply of four major products -- terephthalic acid (TPA), polystyrene, polyvinyl chloride and synthetic rubber, according to a report compiled by a private think tank at the request of the South Korean firms.

The supply glut in the products weighed heavily on Asia's fourth-largest economy as South Korea's exports of TPA reached US$4.5 billion five years ago, but have now tumbled by 70 percent. The four products accounted for 12 percent of the country's petrochemical market.

Joo said the local petrochemical firms have to reorganize their facilities to cut production of such oversupply items and transform their business structure into a higher value-added one.

"The business sector should start corporate restructuring through facilities shutdown," he said. "The government will give full financial and tax support to those who carry out reform."

On Friday, the South Korean government will announce its plan on corporate restructuring in key industries including the steelmaking, shipbuilding and petrochemical sectors. 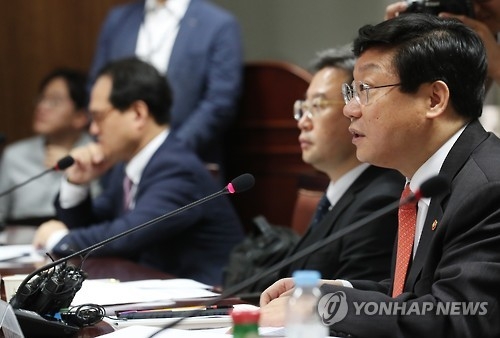