SEJONG, Sept. 28 (Yonhap) -- South Korea and Britain held a trade meeting on Wednesday to discuss ways to expand bilateral economic cooperation after the British exit from the European Union, or Brexit, the trade ministry here said.

In the meeting that took place in Seoul, South Korea's Vice Trade Minister Woo Tae-hee and Mark Price, British Minister of State for Trade and Investment, agreed that South Korea and Britain will continue their strong economic partnership despite the Brexit which is expected to be realized in 2019.

Woo suggested that the two sides launch unofficial trade negotiations as trade with Britain will be no longer be subject to the free trade agreement between South Korea and the EU when Britain is formally separated from the single economic bloc.

The two countries will have economic and trade talks in December in London to discuss details.

South Korea's exports to Britain jumped 27.8 percent on-year US$7.39 billion last year, while its investment into the European country reached $14 billion in the first half of this year. 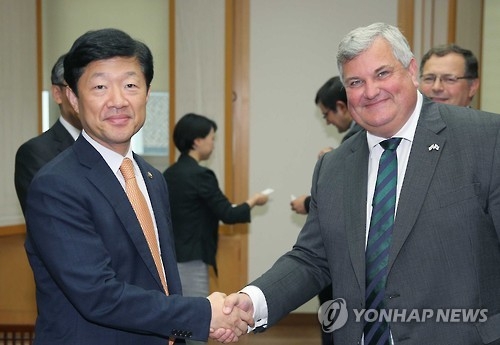