SEOUL, Sept. 28 (Yonhap) -- Dutch Prime Minister Mark Rutte said Wednesday that the revolutionary spirit and the absence of any hierarchical culture in the Netherlands have fostered creativity and openness in the European country.

During a meeting with South Korean undergraduate and graduate students in Seoul, Rutte pointed out that creative people generally hate government control as he highlighted the importance of promoting entrepreneurship.

"I think there is probably an absence of too many policies (in the Netherlands) and that helps because creative people don't want to be steered by the government or to be part of some big plan which I designed," he said. 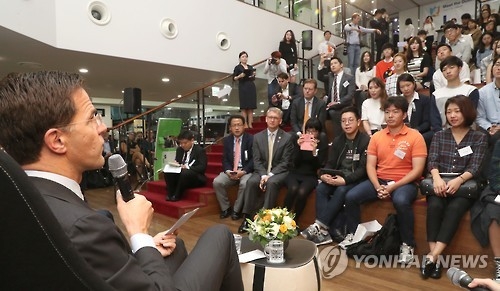 "It has to do probably with this basic revolutionary nature of many (Dutch) people who want to do things their own way, and there is always an acceptance of that."

"I like entrepreneurs because entrepreneurs are positive and forward-looking," he said. "They have the general positive outlook on life, and they create a nicer, positive society where you have many young people starting their own businesses."

The meeting was arranged by the presidential council on the young generation.

A day earlier, Rutte had a summit meeting with Park at the presidential office Cheong Wa Dae. During the meeting, the two countries agreed to elevate their relationship to a comprehensive, future-oriented partnership.

Rutte began his four-day trip to South Korea on Monday, marking his first visit to the Asian country since his inauguration in October 2010. He is reciprocating Park's visit to the European nation in March 2014.