SEOUL, Sept. 28 (Yonhap) -- The daughter of the embattled Lotte Group's founder, currently standing trial for a string of corruption allegations, has been additionally charged with evading some tens of billions of won in taxes, prosecutors said Wednesday.

The Seoul Central District Prosecutors' Office, which is looking into the alleged corporate crimes of the country's fifth-largest conglomerate, said Shin Young-ja is suspected of evading some 56 billion won (US$51 million) in gift taxes in the process of receiving shares of Lotte Holdings from her father Shin Kyuk-ho. Lotte Holdings, based in Tokyo, is the conglomerate's de facto holding firm.

"We have added the charges based on Shin's testimony," a senior prosecutor said, asking not to be named. "The exact amount evaded will be recalculated after further investigation."

The 73-year-old daughter is already standing trial after being indicted in July on charges of embezzlement, bribery and breach of trust.

Prosecutors here have been looking into Lotte's alleged wrongdoings since they launched full-fledged raids into the group's headquarters in June.

Earlier on Wednesday, a Seoul court opened a hearing to decide whether to issue a warrant to formally arrest group chairman Shin Dong-bin as the high-profile corruption probe neared its end. 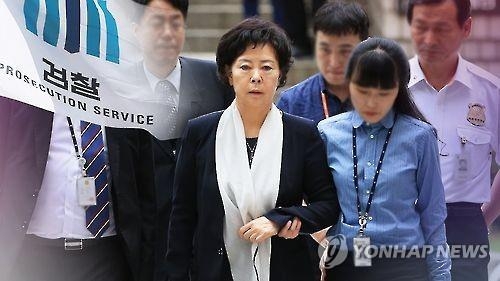