Two goals from Leonardo Rodrigues Pereira helped the hosts to the breezy victory at Jeonju World Cup Stadium in Jeonju, some 240 kilometers south of Seoul. This was the first time since 2006 that two South Korean clubs went head-to-head in the AFC Champions League (ACL) semifinal.

The second leg will be played on Oct. 19 at Seoul World Cup Stadium. The aggregate score after the two matches will determine the winner, with the away goals rule in effect.

Jeonbuk can reach the finals for the first time since 2011 if they avoid a loss by four-goal margin or if they lose 3-0 loss.

The winner of this all-South Korean semifinal will face either Al-Ain of the United Arab Emirates or El Jaish of Qatar for the championship. Al-Ain on Tuesday beat El Jaish 3-1 in their first leg.

Jeonbuk are now 4-0 against Seoul this season, including their three encounters in the domestic league.

Jeonbuk and Seoul are currently the two best clubs in the K League Classic, with the former atop the league standings with an unbeaten record of 18 wins and 14 draws. Seoul trail Jeonbuk by 14 points after collecting 16 wins, six draws and 10 losses with six matches remaining.

Jeonbuk started 196-centimeter striker Kim Shin-wook up front, flanked by two Brazilian attackers Leonardo and Lopes. Seoul fielded Carlos Adriano and Dejan Damjanovic, who have combined for 17 goals at the ACL this season, in a 3-5-2 formation.

Jeonbuk's two Brazilians opened the shots for the hosts. Leonardo's curling right-foot strike in the 10th minute and Lopes' middle-range effort a minute later, however, all went for naught.

Left back Park Won-jae almost put Jeonbuk ahead in the 14th, but his shot rang the crossbar.

Jeonbuk, however, made a breakthrough in the 21st minute when Kim Shin-wook was brought down by defender Kwak Tae-hwi in the box. Leonardo then converted the penalty to make it 1-0.

Five minutes later, Kim Shin-wook and Lopes played a lovely one-two in front of the box, and the latter struck one home with his right foot to beat Seoul goalkeeper Yu Sang-hun.

While Seoul failed to put shots on, the hosts went up 3-0 as Leonardo headed down Lopes' fine cross in the 40th. It was his eighth goal at this year's ACL.

Seoul cut the deficit to 3-1 less than a minute into the second half with Ju Se-jong's left-footed strike. The visitors then pushed forward with Lee Seok-hyun's effort in the 50th and Damjanovic's free kick three minutes later, but both attempts failed to find the back of the net. Adriano's shot in the 59th also missed the target.

To reinforce their offensive power, Seoul replaced Lee Seok-hyun with Park Chu-young in the 65th. Park, former Arsenal and AS Monaco player, announced his presence seven minutes later, but his shot went wide.

Jeonbuk then quashed Seoul's attacking rally in the 84th when Kim Shin-wook scored in the box, his first goal at the ACL.

Seoul had three minutes of added time, but they failed to eat into the three-goal deficit. 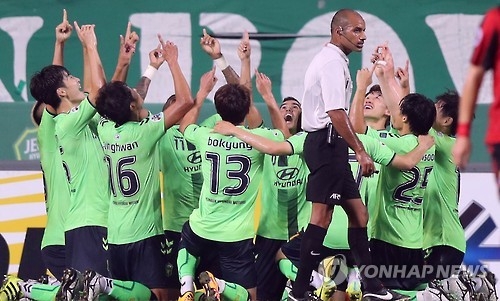