SEOUL, Sept. 28 (Yonhap) -- The transfer of wartime operational control from the United States to South Korea won't be possible at least until 2025 due to increasing threats from North Korea, the Eighth Army commander recently told a U.S. media outlet.

"I would anticipate sometime in 2025 time frame, but again we're not tied to a specific time; we're tied to the conditions," Lt. Gen. Thomas S. Vandal said in an interview with Stars and Stripes last week.

Vandal said U.S. Forces Korea (USFK) has been working with South Korea's military to develop the latter's core capabilities so it could protect itself from enemy attacks. He also serves as chief of staff for USFK and the Combined Forces Command (CFC).

A spokesman for the Eighth Army confirmed his remarks on the possible time frame for the transfer of wartime operational control, known as OPCON, of South Korean forces from the U.S. to the South. 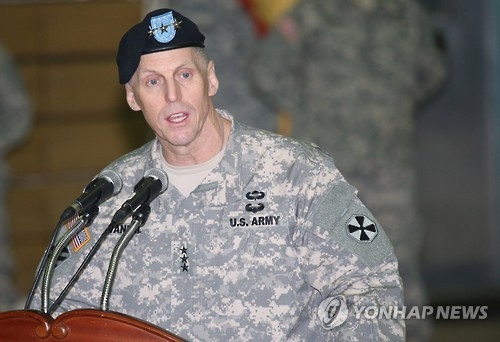 In 2014, Seoul and Washington agreed in their Security Consultative Meeting, to delay the OPCON transfer, previously set for late 2015, until South Korea gains full defense capabilities.

The timing is estimated to be around mid-2020 when South Korea will have finished the installation of its locally produced defense systems like its "kill chain" and Korean Air and Missile Defense (KAMD). The kill chain aims to enhance Seoul's capability to detect and destroy North Korea's weapons of mass destruction.

Washington has held OPCON for the past 66 years since 1950 when the three-year Korean War started. South Korea regained peacetime operational control of its forces from the U.S. in 1994 during the Kim Young-sam administration.

If war breaks out on the Korean peninsula, U.S. and South Korean forces will fall under the bilateral CFC and U.S. commanders will take charge of all forces.