Kim is one of the 23 players on the South Korean roster for the upcoming World Cup qualifiers. South Korea, ranked 47th in the latest FIFA world rankings, will host No. 85 Qatar at Suwon World Cup Stadium in Suwon, south of Seoul, on Oct. 6, and face No. 37 Iran five days later on the road.

The 28-year-old first won a penalty in the 21st minute after he was brought down by defender Kwak Tae-hwi. Kim then made a fine assist to Lopes with a header in the 26th.

In the 40th, the 196-centimeter striker headed down a long ball for Lopes and the Brazilian winger delivered a fine cross to Leonardo Rodrigues Pereira for Jeonbuk's third goal of the match.

While Jeonbuk were trying to fend off Seoul's aggressive attacks in the second half, Kim quashed the visitors' rally in the 84th with a right-foot strike. It was his first goal at this year's AFC Champions League. He received a standing ovation from the fans when he was replaced by Lee Dong-gook in the 86th.

"I didn't think about scoring a goal in this match because I focused on helping other players," Kim said after the match. "I think I've recovered my form and since I spent more time on the pitch with my teammates, I think I was able to play well."

Kim joined Jeonbuk from Ulsan Hyundai this year after capturing the scoring title in the top-tier K League Classic with 18 goals. However, he failed to put together good performances early on as he struggled to recover his form following his basic military training and groin injury.

Kim's recent performance proves he is now back in form. Before the ACL semifinal, he scored two goals in a K League Classic match against Jeju United last Wednesday.

South Korea football head coach Uli Stielike also said on Monday that Kim has reached his form, adding that the striker can bring another attacking option for the team.

Kim will be wearing the national team jersey for the first time since the East Asian Cup in August last year. He didn't make the team for the two World Cup qualifying matches against China and Syria earlier this month.

For Kim, the World Cup qualifiers against Qatar and Iran will be a good opportunity to serve his country once again. The striker, who has three goals in 32 international matches, previously helped South Korea win the gold medal at the 2014 Asian Games and lift the championship trophy at the East Asian Cup last year.

"It's my honor to play for the national team again," he said. "I will sacrifice myself for the country."

Kim said he didn't expect to be on the national team and was actually sleeping when the roster was announced on Monday morning. He said he is determined to play as well as he did against Seoul.

"The national team also has good attacking midfielders," he said. "Although I haven't really played together with them for a long time, they all have good skills, so I will try my best to adjust to their plays." 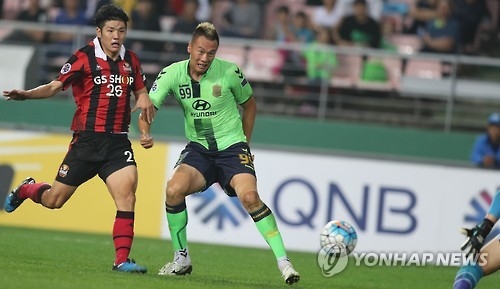