SEOUL, Sept. 28 (Yonhap) -- There is no chance of a Nexit, as the Netherlands will maintain its unwavering membership in the European Union (EU), Dutch Prime Minister Mark Rutte said Wednesday.

"On Nexit, that will not take place. In the Netherlands, support for Nexit has considerably come down," the prime minister said in an interview with a group of South Korean reporters in Seoul.

"It (the support) was about 40 percent now, much lower in the poll. This is because of the affect of Brexit. People see what the Brexit has done to the United Kingdom economy, the UK constitutionally and civility of the UK. So there's no support within this population for Nexit," he stressed.

The term Nexit was newly coined amid growing talks of the Netherlands' possible withdrawal from the EU.

In a national referendum in June, Britain voted to leave the EU, becoming the first country to do so since the European regional political-economic union was formed.

"The Netherlands and Korea are, in absolute terms, the fifth and sixth-biggest exporters in the world. And for the Netherlands, therefore, to be an export nation is crucial," Rutte stressed. "Seventy percent of the export is within the EU. so the EU for us is vital. We cannot survive without having a strong European Union economically as well as for our safety."

Still, the regional union has to reform, the prime minister noted.

"There's growing consensus that the EU has to focus on three things: strong internal market, protecting outside borders and migration," according to the Dutch leader. "The EU should focus on those three areas ... and should not interfere with member states in (internal) issues."

"We very much condemn what the North Korean regime is doing at the moment in terms of the nuclear test and the violations of human rights," Rutte said emphatically.

"We are a member of the U.N. Security Council in 2018 ... so that is an opportunity we have with bigger impact. (We will) Work with the Republic of Korea in its dealings with the North," he noted.

"I made it clear to President Park Geun-hye that she has a friend in the Hague and many friends in Europe. This is firstly an issue for South Korea but also an issue for the region and the world to fight with the North Korean regime," he said.

Leading a 400-member delegation, Rutte came to Seoul Monday for a four-day trip. A day earlier, he met with President Park and discussed tighter collaboration in denuclearizing North Korea through sanctions and diplomacy.

He highlighted that the bilateral relationship between South Korea and the Netherlands now has a new momentum following back-to-back top-level official exchanges between them.

"Guus Hiddink, Miffy, I and the kind could help. This will not go away," he said, conjuring up the popular Dutch football coach who led the South Korean national team through the World Cup quarter-finals in 2002 and the Dutch female rabbit character famous in South Korea. 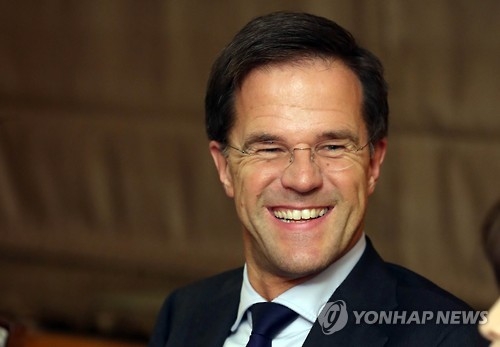